For 32 Vermonters, it’s been a momentous few days at the Republican National Convention. They are the state’s delegates and alternates to the convention, and they bring a variety of backgrounds and levels of political experience to Cleveland.

At age 17, Jace Laquerre from Colchester is already a minor political celebrity. He’s the youngest of all the delegates here, and has handled numerous media interviews.

“It’s definitely new from what a lot of high schoolers are used to. You’ve got to watch what you say, which can be difficult sometime for high school kids,” says Laquerre.

Each delegate has her or her own story of inspiration – that moment that got them into politics. For Laquerre, it was hearing Kentucky Sen. Rand Paul speak last summer.

“His message of liberty and limited government really inspired me and a lot of other young people around the country to get involved with him and his campaign and the Republican party in general,” he says.

Laquerre is still not a Donald Trump supporter, and gave his vote to Rand Paul at the convention. He and another Vermonter were the only Paul votes in Cleveland.

Like Laquerre, Laura Benner of South Burlington has been on a singular mission for months. She hands over a business card that reads, “Strong, from the beginning.”

“I’m a very big supporter of Donald Trump. I have been right from the very beginning. I worked hundreds of hours on his campaign volunteering in many different facets including organizing the rally in Burlington,” says Benner. “I was just so thrilled he declared his candidacy for president, and glad to see it all the way through, and here I am a delegate representing Vermont.” 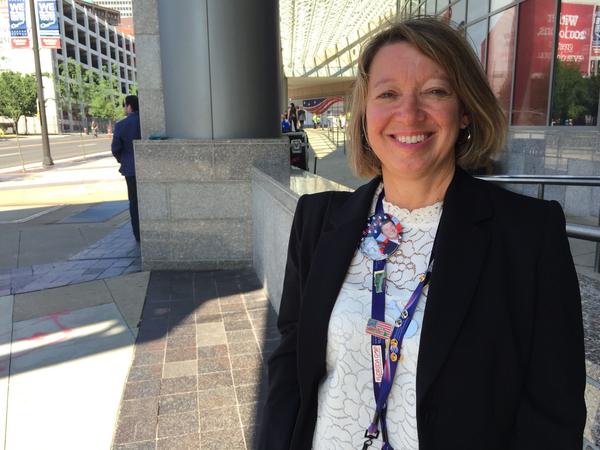 Benner doesn’t offer many details for how Trump’s platform will benefit Vermont. Instead, she talks about his promise to improve the economy and boost employment.

“Being a businessman, he has the background that is definitely necessary and a successful background at that. And he will surround himself with a wonderful cabinet and his administration, and that will see results for everybody, including Vermont,” says Benner.

Like Benner, Rachel Stringer is also new to party politics. A soft-spoken person who wears a simple silver crucifix, Stringer says she came to politics through her faith.

“As a person of faith, there have been a lot of attacks on Christians worldwide, and so my faith in Christ is one of the biggest reasons I’m here,” she says.

Stringer is an alternate delegate in Cleveland. She was inspired to get involved by the life story of GOP candidate Dr. Ben Carson.

“And his message about making a difference, starting with yourself. I did go back to school. I graduated from the University of Vermont, got my nursing degree during the time that I was a single parent. And I really like the message that’s been resonating here last night about that, about getting our country back to work,” says Stringer.

Like the other delegates, she paid her own way to come her, planning her family budget to afford the trip. She says she’s thrilled by the political pageantry.

“It’s Fourth of July magnified by about a thousand times. There are so many patriotic people here. The outfits, especially what the women are wearing, are just very red white and blue, the jewelry. It’s a fashion show. That’s been fun,” Stringer says. 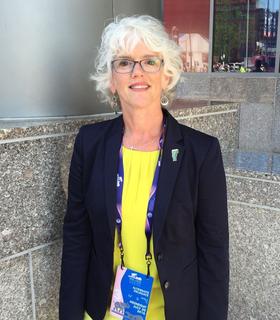 The delegation and alternates include only a few elected politicians, and none who hold statewide office. Trump’s candidacy and the polarization it’s caused led some prominent Vermont members of the party to stay away from Cleveland.

There’s been some division in the delegation also. Three of the 16 refused to vote for Trump. Several were active in trying to force changes to party rules designed to open up the party to more grassroots candidates. Paul Dame, a state representative from Essex, says party leadership effectively squelched the reforms.

“The bitter irony of what’s been happening is that a lot of the rank and file Trump supporters don’t realize how they’re being used by the RNC to give up grassroots power and consolidate it at the RNC level. And unfortunately, that’s what’s happened this year,” Dame says.

But part of the work at the convention is to forge party unity. Chet Greenwood, co-chairman of the delegation, says he expects the party to be stronger and unified in Vermont as it heads to the November election.

Greenwood chairs the Orleans County Republican committee, and he says turnout at monthly meetings has grown as Trump’s candidacy has surged.

“There’s people who have never been to our meetings, never even voted, are now coming to our meetings, because they’re encouraged. They think the economy’s going to improve, and they like the message that Trump has,” he says.

This is also Greenwood’s first convention. He says after being involved in local party politics for 25 years, his friends and associates asked him to step up and help lead the delegation in Cleveland.

Funding for coverage of the presidential conventions is made possible in part by the VPR Journalism Fund.

The doctor-turned-politician from Massachusetts is running for a second time as the Green Party presidential candidate.

Union Of Trump And GOP Cemented On Final Night Of Convention

It has been said that "to cleave" is the only verb in English that connotes one specific action and its direct opposite. To cleave sometimes means to hold together, and it can also mean to split apart.

That's why Cleveland was the perfect city to host the 2016 Republican National Convention. Because this week, in this town, the GOP demonstrated both its persistent divisions and its instinct for overcoming them.

With Trump as Official Nominee, Idea of "Yankee Republican" May Be Changing

Scattered across the GOP convention hall floor in Cleveland, Ohio, delegates from around New England have been cheering in support of Donald Trump, a candidate who has run largely on an anti-establishment platform.