A new wave of forest loss is underway in New England, at a rate of 65 acres a day. That's the conclusion of a new regionwide study spearheaded by a Harvard University forest research group. And the authors say New England could lose more than a million acres of forest cover over the next half-century.

When Paul Hunt heads out into Sebago Lake, he sees a handful of cottages here and there along the shore, but mostly it’s the green cover of a 280,000-acre watershed. Or as Hunt sees it, a vast, natural filtration system for the lake, which supplies drinking water for more than 200,000 people in southern Maine.

“Almost every other water supply in the country that uses a lake or a river is legally required to filter the water and then disinfect it,” says Hunt, environmental services manager for the Portland Water District. “There are about 50 in the country — and this is one of them — that the water is so clean that it doesn’t require filtration.”

The water that feeds the trillion-gallon lake follows an ancient glacial path that starts a few miles below the Sunday River ski area. And thanks to good stewardship by landowners along that 50-mile riverway, Hunt says, the watershed has retained and even bettered its purifying capacities over the last century.

“That’s the good news. The bad news is 91 percent of that land is privately owned, meaning it could be converted to nonforest uses whenever the owners make that decision. It’s their land,” he says. 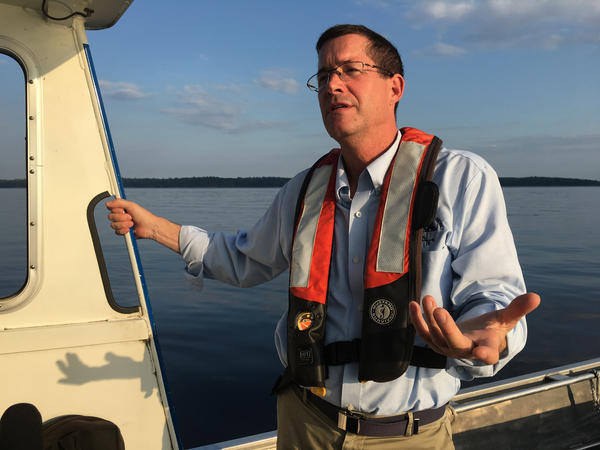 And the risk of forest loss is rising throughout New England, according to a new report from researchers associated with the Harvard Forest in Petersham, Massachusetts.

The report notes that before the end of the 20th century, much of the forestland razed in New England during its agrarian heyday had been reclaimed. But the authors also found that since the 1980s, New England’s farming economy stabilized, and with development continuing apace, the forest cover trend line started heading back down.

“It’s a drip, drip, drip, and it amounts to 24,000 acres a year. So over time it really begins to change the character of the land,” says Robert Perschel, one of the report’s authors and executive director of the New England Forestry Foundation.

Perschel says each of the six states is losing forest each year to housing, businesses, parking lots and roads. The losses range from a low of 800 acres as year in Rhode Island to a high of 7,000 in Massachusetts. If that pace continues, New England will lose 1.2 million acres of forest cover over the next 40 years.

He says soil quality, water quality, wildlife habitat and woodland jobs are all at risk.

“Each New England state is now in a downward trend of forest cover,” Perschel says. “That’s alarming because New Englanders love their forest, we get a lot of benefits from our forest and if we don’t do something about it, it’s going to continue to erode over time.” 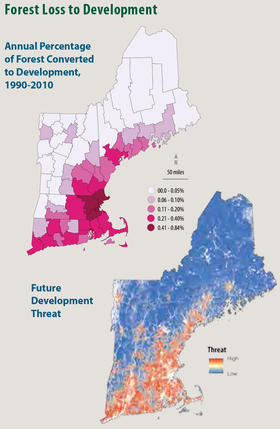 The report finds that since the 2000s, the number of forested acres protected each year by fee or easement has fallen substantially, while annual federal and state funding for conservation has been halved. The authors say it’s time to recommit to conservation, calling for some 70 percent of the New England landscape to be protected forest by the year 2060.

Here in Maine, which is home to more than half the region’s forested acres, the protection goals can make people like Patrick Strauch, executive director of the Maine Forest Products Council, a bit wary.

The report’s authors say they don’t want to lock up New England’s forests. Although they call for preservation of 3 million acres in a wild state, the remaining 27 million acres would be barred to development, but still open for forestry, recreation and other economic activities.

This story is made possible by a grant from the Doree Taylor Charitable Foundation.

Unlike large hydropower dams, where there's often serious political and emotional resistance to removal, conservationists are finding many landowners of small dams are happy to have them removed.

For more than half a century, a massive, oil-fired plant has been churning out electricity from an island in the heart of Maine’s Casco Bay, where sailors use its towering smokestack for navigation.

The old generator is expensive to run and dirtier than new technologies, so these days it comes on only a few times a year. Nonetheless, since December, the wires on the island have been humming pretty much nonstop.