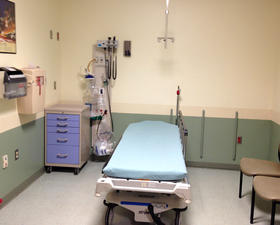 If the Affordable Care Act is repealed without a replacement, hospitals in Rhode Island could take a hit.

That includes money to help cover care for low income patients. And it threatens a new way of paying for patient care.

Listen
Listening...
/
Hospitals worry the ACA could mean big losses--not only for their bottom line but for recent innovations.

Here’s one thing hospitals could lose if the Affordable Care Act disappears: patients who can pay.

Whether you have insurance or not, the ER here at Rhode Island Hospital in Providence will take care of you. If the Affordable Care Act is repealed, more people could come through those doors without insurance. People who got covered, for example, in states that expanded Medicaid, states like Rhode Island. And those Medicaid funds were a big deal, says Rachel Garfield with the Kaiser Family Foundation.

“It is fair to say that if the Medicaid expansion goes away wholesale and things go back to the way they were before this expansion was in place, that a lot of those hospitals would see an increase in their uncompensated care costs," Garfield says, referring to unpaid medical bills.

There’s still a gap, says Garfield, because Medicaid doesn’t always cover the complete cost of care. But it’s been better than nothing. Now, if that Medicaid coverage goes away, hospitals could lose more than $160 billion dollars nationwide, according to an American Hospital Association estimate. And there’s another concern.

“Well, personally I’m worried that the progress we’ve made over the past five years would be threatened," says Dr. Timothy Ferris with Massachusetts General Hospital in Boston. He says the ACA encouraged hospitals—with financial incentives--to experiment with how to take care of patients and save money.

"We have now more than 20 different programs: video visits, electronic consultation with specialists, home hospitalization, programs for patients with diabetes and heart disease. And I would be worried that a repeal of the ACA would undermine our ability to invest in services for our patients that we’re now investing in,” says Ferris.

Like many hospitals in New England, Mass General has signed agreements to create Accountable Care Organizations, or ACOs, a kind of partnership with physicians and insurers in hopes of saving money. This is how they work: insurers pay doctors for the quality of care they provide patients, not for every test and procedure, like the typical system. Ferris knows those programs haven’t paid off yet. But he says they need time to work out the kinks.

“One of the things that it’s difficult for people outside of health care to appreciate, particularly politicians, is how long it takes to make significant improvements in the delivery of care," Ferris says. "Because delivering care to patients, you have to be very careful when you make changes," he says, or risk harming patients.

Many other hospitals across the country have invested in these new networks – often overhauling medical records systems, hiring staff, and creating new services. Dennis Keefe, head of the hospital chain Care New England, says he worries about the future of his ACO, Integra.

“I think if there’s a real change in direction away from these alternative payment models, we will be assuming risk to care for a population. We have invested enormously to be successful in this area. We have gone from zero premium dollars flowing through this organization to a billion premium dollars," says Keefe.

These are seismic changes in the way hospitals do business. And most want the government to keep supporting these innovations. So do Rhode Island health officials, who say they’re part of a bigger movement to overhaul health care in the state.

Obamacare Helped The Homeless, Who Now Worry About Coverage Repeal

Everyone expects Congress to change the Affordable Care Act, but no one knows exactly how.

The uncertainty has one group of people, the homeless, especially concerned. Many received health coverage for the first time under Obamacare; now they're worried it will disappear.

Joseph Funn, homeless for almost 20 years, says his body took a beating while he lived on the street.

Now, he sees nurse practitioner Amber Richert fairly regularly at the Health Care for the Homeless clinic in Baltimore.

Through years of acrimony over the relative merits of Obamacare, one kind of health insurance has remained steady, widespread and relatively affordable: Employer-sponsored plans.

Job-based medical plans still cover more Americans than any other type, typically with greater benefits and lower out-of-pocket expense. Recent cost increases for this sort of coverage have been a tiny fraction of those for Obamacare plans for individuals.

Aetna's Bertolini: We Should Welcome Everyone To This Country

The CEO of Aetna has spoken out against Donald Trump’s ban on travel from several Muslim-majority countries. Mark Bertolini explained to Bloomberg that he’s the grandson of immigrants.

Yale medical students, doctors, and other health care providers demonstrated in New Haven to express their outrage over the Donald Trump administration’s move to repeal the Affordable Care Act.