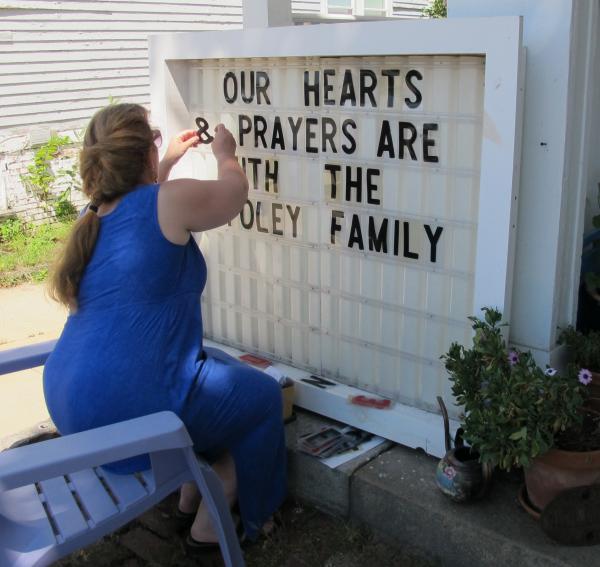 There’s been no shortage of people mourning the killing of James Foley by Islamic State militants. President Obama interrupted his Martha’s Vinyard vacation Wednesday to recall Foley -- who disappeared two years ago in Syria -- and to condemn his killers.

“People like this ultimately fail,” Obama said. “They fail because the future is won by those who build and not destroy. The world is shaped by people like Jim Foley and the overwhelming majority of humanity who are appalled by those who killed him.”

There was an outpouring of grief Wednesday in Rochester, where Foley grew up.

Foley’s parents Diane and John told reporters on Wednesday “we just kept thinking that somehow we’re getting closer, we know he’s alive.  We just ran out of time. He ran out of time.”

175 people showed up for Mass Wednesday morning at Our Lady of The Holy Rosary, where the Foley family is parishioners. Father Paul Gousse says he’s been trying to help the Foleys and other church members make sense of something truly senseless. “I know that this has international ramifications,” says Gousse, “but for us this is personal.”

Sheri McSheehy adjusts the ampersand in a sign outside her business in downtown Rochester.  It reads: ‘Our hearts & prayers are with the Foley family.”

McSheehy says she and the customers she’s talked to are proud of Foley’s courage in the face of danger. “As much as we would just love to take our children and lock them in our bedrooms and not let them go anywhere,” she says, “this was his mission in life, to report what was going on.”

Children were playing and laughing at the Rochester Child Care Center, where US Senator Jeanne Shaheen had planned a campaign stop.  But before any cheerful photo ops were had, media were escorted to an empty preschool classroom.

Here, Shaheen praised the man’s courage, saying “James Foley was an amazing journalist.  He went into conflict areas at his own risk to report the story.” She said she considers Foley’s beheading an act of terrorism against the United States, saying “it is a heinous and barbaric crime that ISIS has committed against him.”

Funeral arrangements for Jim Foley have not yet been made.

Listen
Listening...
/
Listen to the radio version of this story.