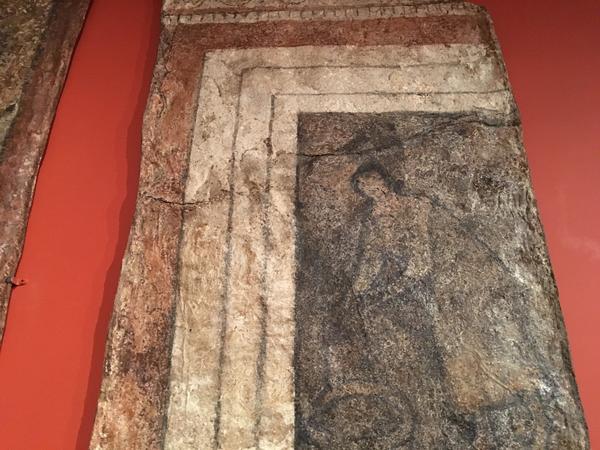 Just over 200 years after Jesus died, in 240 A.D., someone made a wall-painting of a woman in a house in the ancient city of Dura Europos, now in modern Syria.

And, a few years ago, the Yale University Art Gallery opened a room devoted to artifacts from Dura—they’re just a small selection of the some 12,000 artifacts that were collected from excavations over the years. That’s where the painting can be found, tucked away in a corner.

“We see a figure, leaning over, and there’s a round structure in front of her,” says Yale curator Lisa Brody, pointing out the painting. “This has traditionally been identified as the Samaritan woman at the well. And people have accepted it because it made sense. There was no reason people saw to question it.”

But in a new book, The World’s Oldest Church, Fordham University professor Michael Peppard suggests the painting might not be the woman at the well, but a very early representation of the Annunciation; that’s the moment Mary learned she would give birth to Jesus. It’s one of the most important moments in Christianity, and one of the most depicted moments in art history. Over the centuries, artists from Leonardo Da Vinci to Dante Rossetti to Andy Warhol have painted scenes of the Annunciation.

And Peppard believes this one may be the first depiction of the Annunciation, and even the the earliest known painting of the Virgin Mary.

“I started to uncover this whole tradition of the Annunciation to Mary at a water source,” he says; “It turns out this tradition comes primarily from the East. It’s well-represented in Syria.”

Peppard says if this is indeed Mary, then the Annunciation may have non-Western origins.

“Most of what Western Christians know comes out of the Western tradition based in Rome, that came down through Europe,” he says, “but there’s this very robust and ancient tradition coming out of Syria, the cradle of Christianity.”

The house in Dura where the painting of the woman was found is believed to be the oldest example of a ‘house church’—a meeting place for Christians in the days before monasteries and cathedrals.

Today, there’s a war in Syria, and the Islamic State controls territory that includes the ruins of Dura. The militant group is known for looting and destroying historical artifacts. Brody says archaeologists know those ruins held a lot more treasures. But it may be too late to save them.

“We have reports from dawn to dusk, hundreds of people digging holes in the surface of the archeological site,” she says. “Aerial photographs that show the entire surface covered with these holes. People searching for antiquities to sell on the black market.”

That means, ultimately, almost everything left to see and appreciate from Dura might be in New Haven, Connecticut.

In April, Yale and the United Nations are hosting a colloquium to talk about what universities and museums can do to protect ancient art from threats like the Islamic State.

Yale Celebrates the Centennial of Dada

Yale University Art Gallery is celebrating the centennial of the art movement known as Dada with a series of events, a major exhibition, and a Dada Ball.

Checking in With Connecticut's Director of Culture; Avoiding Family Homelessness in Hartford

This hour, Kristina Newman-Scott sits down with us for the first time since becoming Connecticut's director of culture in 2015. We find out how things are going in her new position, and take your questions about local arts and culture.

For Syrian-Born Artist, "Remodeling the Destruction" of Civil War Is Dark, But Hopeful

Think of them like magic portals: tiny architectural models transporting you directly onto Syria's streets and forcing you to look at the bombed-out buildings and homes hit by the worst of that country's civil war.