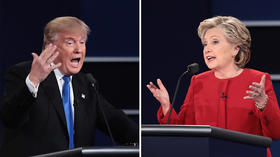 Following their first debate Monday, Hillary Clinton has a 7-point lead over Donald Trump in New Hampshire according to a poll released Friday by WBUR.

The poll surveyed 502 likely voters and has a margin of error of 4.4 percentage points.

The poll also found the vast majority of voters believe Clinton won the first debate. She faced off with Trump Monday night at Hofstra University.

"She had what appeared to be a very good performance - voters rated it very positively in the debates," said Steve Koczela, president of the MassINC Polling Group, which conducted the WBUR survey. "And she seems to have stopped the slide that was experiencing going into the debate."

The first presidential debate. A former Connecticut governor going back to prison. A special session for Sikorsky. A direct flight to Ireland. An African American history museum.

Donald Trump and Hillary Clinton said some things that were flat out untrue — or misleading — in the first presidential debate Monday night. (Check out NPR's comprehensive fact check here.)

The first presidential debate was a tense affair between Hillary Clinton and Donald Trump as they clashed over their economic and trade plans, national security and race relations in the U.S.

The Republican nominee came out aggressively against Clinton, often interrupting her and talking over her, but the Democratic nominee didn't pull her punches either and had plenty of zingers ready. And as the night wore on, Trump appeared repeatedly rattled as he was pressed on his past support for the birther movement and controversial comments about women.

A lot of focus has been on the presidential election with just five weeks left in the campaign. But there’s also a U.S. Senate race going on, among races.