The nation’s first offshore wind farm off the coast of Block Island is in the middle of its testing phase. It’ll start producing electricity next month. Delegates from various federal Sea Grant programs around the country got a boat tour of the turbines to learn how the Ocean State got this project done. 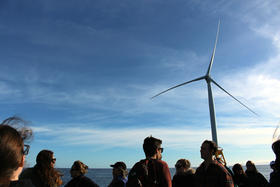 Before we talk about how Rhode Island built the nation’s first offshore wind farm, let’s talk about what these machines look like.

“They kinda look like something you’d see in Star Wars or something like that,” said Jim Wilkins from the Louisiana Sea Grant program. “They’re massive structures. Very futuristic looking.”

His colleague Dianne Lindstedt thinks they look “very majestic. I call them gentle giants. I’ve seen them in Denmark in operation.”

Both of them think it’s very cool to finally see offshore wind turbines in the United States. They’re two of about nearly 140 visitors from different Sea Grant programs across the country on this tour looking to learn from the Ocean State.

“These towers are about 600 feet to the tip of the rotor,” said Grover Fugate, executive director of the Rhode Island Coastal Resources Management Council, as he talked about the height of the turbines from top to bottom when a blade aligns vertically to the rest of its tower. The foundations are sitting in 90 feet of water. Each blade stretches out about 240 feet.

“Even being close to them, until you see a human on board, it’s a little hard to appreciate the scale of these structures until you can get something to figure out what the relative scale is,” said Fugate.

A crew member pokes out from some one of the towers to wave at people on this ferry. He looks like a tiny speck. People marvel at these giant windmills.

But the scale of the turbines isn’t the only difficulty that offshore wind projects face. Projects proposed long before this one failed because there were too many unresolved conflicts between interest groups. Fugate says this has been different.

“If you do it right and you bring in the stakeholders and you try to accommodate the interests, that's the difference whether you end up in litigation or building,” said Fugate.

That’s the role the Rhode Island Sea Grant, located at the University of Rhode Island, played in bringing stakeholders together. Jen McCann, who directs the state’s program, said many stakeholders, from fishermen to the Narragansett Tribe had questions about this project.

“You know what is the impact? What is the effect of the people of Rhode Island? … Our job was to respond to those questions and bring the experts to the people and better understand with us what those potential effects were.”

Rhode Island researched those potential effects and navigated conflicts through the state’s special plan for how to manage human activities at sea. This group of U.S. visitors wasn’t the only people learning about it. Rhode Island’s ocean plan has become a case study for the European Union which sent delegates to the state recently.

Construction of the South Fork Wind Farm, the project’s first phase (proposed for the Long Island Power Authority) could begin as early as 2019, depending on when Deepwater Wind secures permits.

This report comes from the New England News Collaborative. Eight public media companies coming together to tell the story of a changing region, with support from the Corporation for Public Broadcasting.

Photos: a Visit to the Standing Rock Pipeline Protest Camp in North Dakota

Since April, protesters against an oil pipeline have been camping in tents, tipis, and trailers at a site just across the Missouri River from the Standing Rock reservation in North Dakota.

According to a scorecard released on Tuesday by the American Council for an Energy-Efficient Economy, New York and Connecticut tied for the fifth most energy efficient states in the country.

Does Wind Energy Have a Future in Connecticut?

Greg Zupkus stood in the shadow of one his company’s wind turbines. A low hiss came from the turbine’s cooling fan, and in the distance, sporadic gun shots popped off from the adjoining hunting club. But the turbines, surrounded by fields and forest, and turning in the light summer breeze were, for the most part, quiet.

Drivers going through Colebrook on Route 44 may notice the state’s first two commercial turbines towering over treetops a short distance from the road. The owners of those turbines are now proposing to build a second, larger wind farm in the nearby town of Goshen.