Editor's note: Since this story was originally published — on Friday, July 29 — Explore.org, in partnership with the National Audubon Society, captured this dramatic slow-motion footage of a bald eagle attacking ospreys on Hog Island, Maine. Watch below, then read our story about what the bald eagles' resurgence means for other bird species.

Call it conservation blowback: Since the 1970s, when the pesticide DDT was banned and the Endangered Species Act took effect, the emblematic American bald eagle’s population has roared back from near-extinction. But more eagles need more food, and for some other struggling bird species — here in Maine and around the country — the eagle’s success story has a menacing side.

By the early 1980s, the eagle population in Maine had dropped to fewer than 40 nesting pairs. But now they are flourishing. Today there are well more than 700 pairs nesting in Maine.

Bird tour operator and scientific researcher John Drury pilots his old lobster boat out into Penobscot Bay, about 15 miles off Rockland. He has been visiting a rocky archipelago of seabird colonies here for decades. He watches a black-headed, juvenile eagle arc into the air, and two gulls rising to chase it off.

“They are after him right now,” he says. “They’ll try to keep him off of there.”

Around the bend a handful of great cormorants — big, dark birds with long, hooked beaks — guard their nests. And out on a nearby ledge several more young eagles loaf and watch.

From Drury’s perspective, that’s a problem. Those great cormorants living under the eagles’ gaze are some of the last to breed in the U.S. Once extirpated here, the great cormorants too have made a comeback, reaching a peak of 240 nesting pairs in the early 1990s. 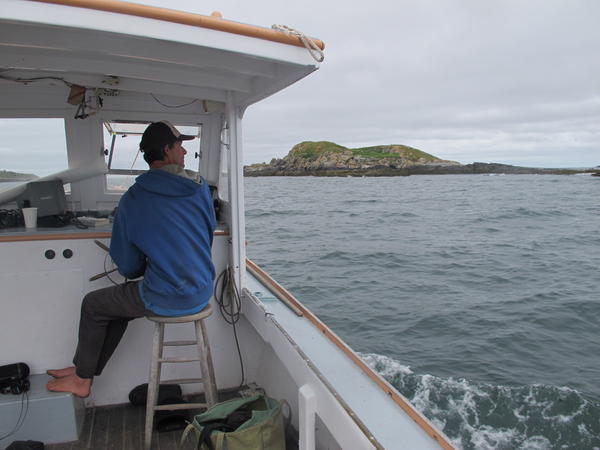 “And there are 40 pairs this year — and eagles have been attacking every colony every year, pretty much,” he says.

It’s not just great cormorants that are getting harassed. About 50 miles southwest of Drury’s birding grounds, in Casco Bay, state biologist Brad Allen is documenting declines in several avian species, some common, some not. This day he’s looking for great blue heron, designated a species of special concern in Maine.

“There’s one right there — is that an eagle or a great blue heron?” he says.

It’s a heron — a majestic, prehistoric-looking bird. When Allen last studied the species in the 1990s, he counted roughly 1,200 nesting pairs along the Maine coast. Now the coastal heron population is a third of that.

“So it’s down quite a bit,” he says. “We’ve actually witnessed some subadult bald eagles in the heronry. Right when maybe the young are just getting ready to fly for the first time, they’re getting in there. It’s just catastrophic.” 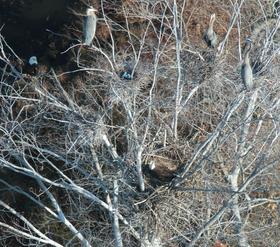 Allen says eagles are contending with a big drop in their traditional coastal prey — cod, salmon and other fish whose populations have been hurt by overfishing, dams and warming ocean temperatures.

“In the absence of a bay full of fish they are going to eat the next available chunk of protein, and it might be a cormorant or a young great blue heron,” he says.

Seabirds face other threats as well. But the eagles are putting real pressure on, and with their population growing at an 8 percent clip around the country, it’s an emerging issue for wildlife managers.

“We are headed into a golden age for eagles. We haven’t had this many eagles in the Chesapeake since colonial times,” says Bryan Watts, director of the Center for Conservation Biology at Virginia’s College of William and Mary. 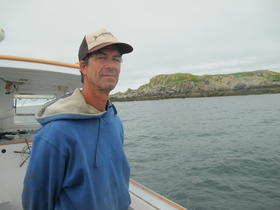 Watts says that as in the Gulf of Maine, Chesapeake Bay is seeing growing eagle predation on other birds, some of them rare. Watts says he can foresee a time when the issue becomes acute enough to force a new approach to eagle management — focusing less on the single species and more on its role in a larger ecosystem.

“In terms of eagles, because of their status within our society, it’s a discussion that’s been put off, but ultimately we’re going to have to face,” he says.

Right now the only real strategy to deal with rising eagle predation is to scare them off. Maine hosts the only U.S. population of Atlantic puffins, a clown-faced little avian popular with birders.

During the nesting season when the puffin eggs and chicks are most vulnerable, volunteers are posted at some of their colonies to wave off marauding eagles. But when humans aren’t around, puffins, like the other seabirds, will face a growing number of eagles — on their own.

And another kind of conflict could become more fraught, as the eagles expand their territory. Watts says in his region, wildlife management has put restrictions on some $10 billion worth of private property to protect eagle habitat.

So it won’t be just the great blue heron that’s subject to rising pressure from the iconic bald eagle, but perhaps a more formidable occupant of the ecosystem — the great American landowner.

Each year, thousands of deer are killed on Connecticut roads and highways. Those collisions can lead to costly insurance claims, injuries, and deaths -- which made scientists wonder what would happen to deer, and to us, if an elusive carnivore came back to the northeast: the mountain lion.

This hour, we look at the impact of climate change on New England's native plant and animal species. We talk with scientists and science journalists, and we hear from you. Have you noticed anything different about the flora and fauna in your backyard? And what can historical records -- like the observations of naturalist Henry David Thoreau -- teach us about our changing environment?

A rare bird described as a "flying rainbow" that normally doesn't fly north of the Carolinas on the East Coast has turned up in a small town in Vermont, drawing hundreds of bird watchers to Pittsfield hoping to catch a glimpse of the painted bunting.