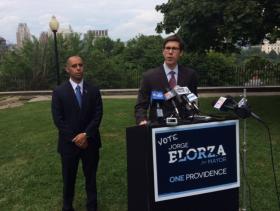 Smiley's announcement came exactly 24 hours after his latest policy proposal, a road-improvement plan touted during a news conference near the Providence train station.

Yet Smiley and Elorza said they had talked, and with internal polls showing Solomon out front, they decided Elorza was the top hope for keeping Buddy Cianci, a twice-convicted felon, from regaining his hold on City Hall.

Smiley called Elorza "the best chance to making sure that the city we love can keep moving forward," and he said they share similar stances on most issues. "That's why I'm proud to stand here today and endorse his candidacy for mayor of the city of Providence."

During a news conference at Prospect Park on the East Side, Smiley was most aggressive in trying to link Solomon with Cianci, citing how Solomon faces a state Ethics Commission probe expected to be resolved after the September 9 primary.  "We all have a role to play in making sure that people like Mike Solomon and Buddy Cianci don't have an opportunity to succeed in our city," Smiley said.

In a statement, Solomon fired back:

“While others have focused on making deals, I've been focused on my record of leadership in the city and my plans to rebuild our schools, make our neighborhoods safer, and create jobs," Solomon said. "This race is critical to the future of Providence. This last minute backroom political deal is not the solution to defeating Mr. Cianci in the fall. Their arrangement is reminiscent of the politics of the past and the last thing Providence needs at this critical juncture."

Solomon continued, “We have worked too hard and come too far to return to the ways of the past. For the last four years we have pulled our city back from the brink of bankruptcy and created a more transparent local government. We made the tough decisions that had been put off for far too long. We must keep moving forward.”

Solomon's statement doesn't mention the Ethics Commission probe sparked by a complaint from a city council candidate. It does include this observation from Solomon's campaign manager, Jake Bissaillon: “Michael Solomon had pulled away in this race for Mayor and the other candidates knew that. Michael is the clear front runner in the primary and the only Democratic candidate capable of winning in November. Last minute theatrics do not change that Michael’s effective leadership is what we need both to continue to move Providence forward, and also to win that tough general election against Mr. Cianci.”

Elorza and Smiley didn't offer a definitive answer when asked whether, if  Elorza wins the mayor's office, he will hire Smiley.

Rather, Elorza, a former Housing Court judge and Roger Williams University Law School professor, focused his rhetoric on moving the city forward and defeating Cianci, 73, who is staging a comeback attempt that has attracted national attention. Speaking of a possible victory by Cianci, Elorza said, "Brett and I both agreed there was no way we could let that happen."

Cianci told RIPR he's unruffled by the Democrats' talk about keeping him from office. "As far as I'm concerned, I don't what they're talking about or what their machinations are or what their dealings are," he says. "They should be discussing the issues of the future, and those are, how come our streets aren't as safe as we want them to be, why can't we create more jobs and stimulate our economy, and why aren't our kids learning better? Those are the kinds of things I'm focused on right now, and that's what I'm concentrating on. I can't control what they're doing or what deals they're making."

Smiley called his new alliance "quite the opposite" of an insider deal. "We have, unfortunately, someone who's right now in a position to win the Democratic primary, if we didn't work together, who is the king of a 'know a guy' running against the former king of the 'know a guy' system. And that all of us who care about ethics and transparency and good government need to stand together to finally turn the page on corruption."

Asked whether it was fair to link Solomon with Cianci, Smiley said, "The general election, where we have a two-time convicted felon for the very same reason of the way he ran this specific job against someone currently under investigation by the Ethics Commission, who has a $400,000 unpaid sweetheart loan to the city, is not a contrast that is good for the voters ... I'm saying that both Mike Solomon and Buddy Cianci would return our city to the dark days of its past and not to the future that we know that we can have."

Smiley's staffers are expected to volunteer to some degree for Elorza's campaign.

The news conference was briefly interrupted by the third Democrat in the mayoral field, perennial candidate Chris Young.

Smiley has run a spirited campaign, with a series of policy proposals, a clever television ad, and some impassioned supporters, but he had difficulty in extending his appeal beyond his base on the East Side of Providence. From the time when Smiley announced his run in December 2013, some campaign observers were highly skeptical he could create a path to victory.

Smiley becomes the second candidate, after Democrat-turned independent Lorne Adrain, who has folded his tent with an express desire to keep Cianci, the longest serving mayor in Providence history, from returning to City Hall.

Smiley's exit leaves the Democratic field to a study in contrasts: Elorza, a cosmopolitan and intellectual son of Guatemalan immigrants, and Solomon, a representative of Providence's traditionally powerful Ward 5 who runs restaurants, wrestles with challenges in public communication, and yet nonetheless has built a strong campaign, thanks to early fundraising, a smart campaign team, a broad array of endorsements, and his strong knowledge of the city and its politics.