A western Massachusetts business owner faces a boycott of his stores after attending an event with President Trump last week. But he says he's being unfairly targeted.

Last Thursday, President Trump signed an executive order at the White House which would impact the Affordable Care Act.

Ratner said he was invited to the event by the National Retailers Association, and that he's long advocated for the small business change.

"Petco, PetSmart, Costco -- all these chains with a huge amount of employees, they go out and they bargain with the insurance companies," Ratner said. "Dave, or the plumber, or the barbershop, goes out to try and get health insurance for their employees. We don't have anywhere near the bargaining power. So we pay way more."

But Ratner said he wasn't aware beforehand of the full impact on Obamacare of what Trump was signing. And he said he had no idea that Trump would later that day also order that federal health insurance subsidies be cut. 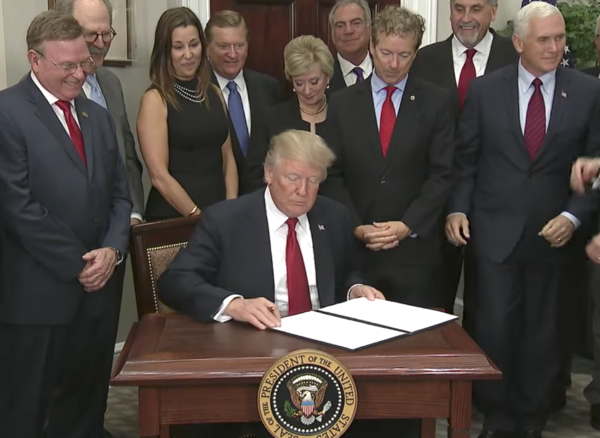 "In my particular case, had I known that he was going to announce that he's dismantling Obamacare, I never would've gone," Ratner said.

But the reaction to his White House appearance has been swift.

Many people have posted angry messages on the Dave's Soda and Pet City Facebook page, and someone started an online petition calling for a boycott.

Ratner said customers are also venting their feelings in person.

"We've had some people screaming at our employees," he said. "'How could your boss do this? What kind of person is he?'"

And Ratner himself is feeling the strain.

"I said to my wife last night, I said: you know, I just want you to know I love you, in case I don't wake up. In case I drop dead when I'm sleeping," he said.

He insists he's not a Trump supporter, and that he voted for Hillary Clinton. And he's flabbergasted by what's come of it all.

"Why people are taking it out on me for going to Washington to do something that I thought was going to do good for millions of people. I just don't get it," he said.

The White House offered no comment on how much Ratner or the other retailers knew about exactly what was in the Executive Order.

But a spokesperson sent a statement, saying the changes would help American businesses -- and their employees -- access lower-cost insurance.

Trump Uses Executive Pen To Chip Away At Obamacare

President Trump signed an executive order Thursday that is intended to provide more options for people shopping for health insurance. The president invoked his power of the pen after repeated Republican efforts to repeal the Affordable Care Act, also known as Obamacare, have failed.

An analysis of the Republicans’ latest attempt to repeal and replace the Affordable Care Act claims that the effect on Connecticut could be severe. According to one estimate, the state stands to lose about $4 billion in federal funding in 2027, when the bill’s temporary block grant system would expire.