For Residents On The Connecticut River, Hydro Dams' Relicensing Is A Rare Opportunity

Right now, a group of hydroelectric dams on the Connecticut River are undergoing a once-in-a-generation process – a federal relicensing. NHPR’s Annie Ropeik went to the dams and talked with people who live, work and play nearby about what they hope might change.

Steve Stocking has farmed the banks of the Connecticut River in Fairlee, Vermont for 50 years. He took me to the edge of his cornfields in early May to see the river, and what he feels nearby dams have done to his land.

“The slope falls down, especially when it soaks with water from high levels, and then it runs out quickly … and it weakens the support, and it sloughs down,” Stocking says. 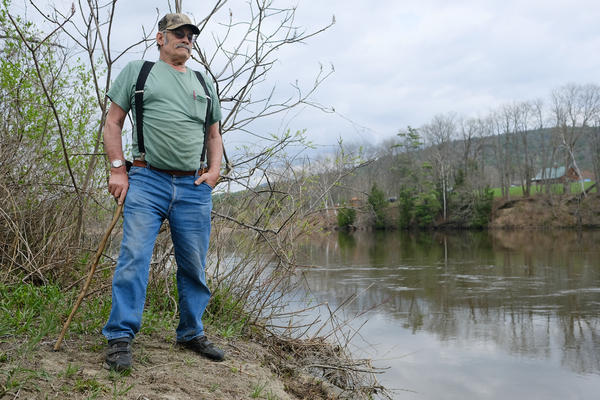 Down here, we can see where the water has carved away the muddy banks. Now, all rivers cause some erosion, but Stocking says the dams constantly raise and lower the water level more than is natural – and he thinks that’s cost him 85 feet of property since he came here.

“To sit here and watch land that you pay taxes on and could grow corn or crops on be sloughing off into the river,” Stocking says, then sighs. “I don’t know what to tell you, if we’d have bought it, but it was what we did.”

Stocking’s farm is 18 miles upriver from Wilder Dam, near Dartmouth College. This puts him well within Wilder's 45-mile reservoir area.

Stocking and others want to have a say in how much water the dam pulls from that reservoir each day.

“We’ll have our chance now and there won’t be another chance for another 50 years,” says Kathy Urffer, who works for the Connecticut River Conservancy.

She says it’s a unique moment because Great River Hydro, which owns lots of dams on the Connecticut River, is seeking new federal licenses for Wilder Dam and two others. These permits are decades long, and Urffer says they spell out exactly how the dams will operate. 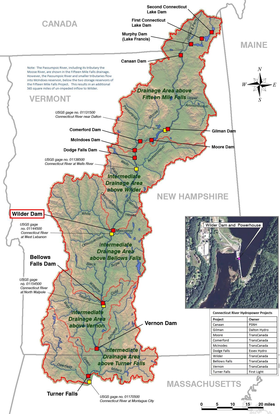 At Wilder dam, we can see those operations in action.

“You can look upstream and there is a pretty calm pool of water that looks like a lake,” Urffer says, laughing. “And then if you look downstream – and you might be able to hear the water flowing – what you see is the water coming through the dam. You know, there’s basically whitewater below the dam that then is flowing down.”

As that water flows, it runs through turbines that create electricity. Great River Hydro holds back some or all of the river’s flow every day until the time is right to sell power. Then they open the floodgates.

Further south is Bellows Falls Dam – another that’s up for relicensing. Urffer shows me how excess spring meltwater is rushing through a channel on the side of the dam, called a bypass.

“One of the things that we would like to see is water in this bypass all the time, and basically restoring the habitat here in this section of the river,” she says.

Urffer wants more protections for fish and mussels – at the dams and in their flow rates.

She also wants people to have better access to the river. Right now, the dams are kind of foreboding – we keep passing warning signs as we walk around Bellows Falls.

Urffer reads one aloud: “Warning – changing water levels – be constantly alert for water increases – water upstream may be released at any time.”

People who are into whitewater paddling think this area could be made just safe enough to be really fun. They even had Great River Hydro do an official study, where the dam released different amounts of water and paddlers tested them out.

MAP: Click the dots to see the dam names & other places visited in this story.

John Ragonese is in charge of this whole process for Great River Hydro. He says he’s here to collaborate with everyone the dams affect.

But his company and other groups disagree with those who say the dams are causing widespread erosion on the Connecticut.

Ragonese says that’s based on a misconception about how much the dams control the river. He says they can adjust the water level right at the dam – but you wouldn’t see the same fluctuations miles upstream.

“We cannot control the flow,” he says. “The flow is what the flow is. We just take advantage of the flow.” 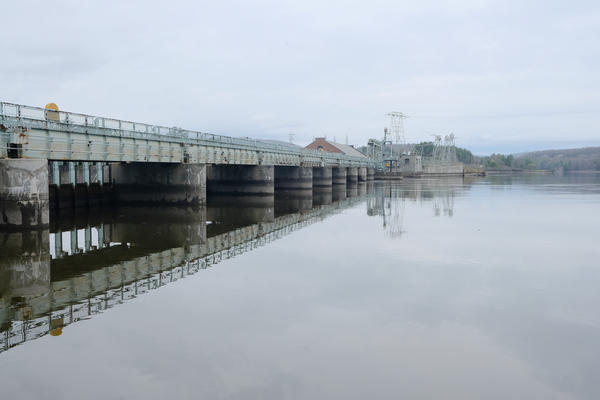 Still, some groups want Great River Hydro to put money in a fund to mitigate the dams’ impacts. The company did that for facilities in Northern New Hampshire, back in 2002. Ragonese wouldn’t comment on whether it’ll be part of the current relicensing process.

He notes that Wilder, Bellows Falls and Vernon Dams owed a combined $10.2 million in property taxes to 29 towns in Vermont and New Hampshire this tax year.

Whatever changes occur in relicensing, Ragonese says, they need to preserve the dams’ flexibility – because these are the kind of plants that have to kick on fast if there’s a problem elsewhere in the electric system.

“Our mandate is larger than, ‘How can we extract the highest amount of dollars from the water?’” he says. “We have a responsibility – that’s why we have the license, to provide a power resource that is needed … to the New England grid.”

I wanted to experience a dammed river firsthand, so I got in a canoe with Norm Sims. He’s an avid paddler who works on relicensing for the Appalachian Mountain Club as a volunteer.

“This is my first paddle of the year,” Sims says as we push off below Vernon Dam. “It feels like I just got out of the boat last fall.” 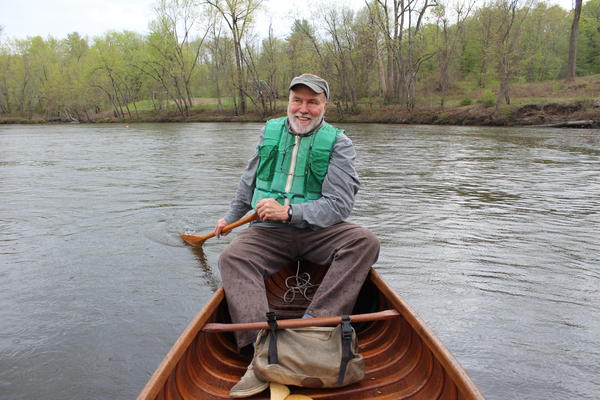 Vernon Dam is the last Great River Hydro facility on the New Hampshire border that’s up for relicensing. It was built in 1909 – about as old as the wood and canvas canoe Sims chose from his personal collection for this trip.

It’s a beautiful, sunny day for a paddle down the river. We glide past bucolic scenery, little islands and secret waterfalls. Sims keeps getting distracted by birds.

At first, it’s easy going – we’re paddling with the current and the wind. But then the river starts to push back.

“You notice how it feels like we’re not moving very fast?” Sims asks from the back of the boat. “We may be entering the backwater from the Turners Falls Dam, which would be disappointing, because we have miles to go before we sleep.” 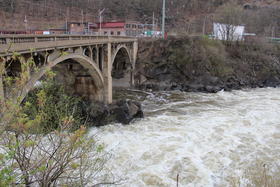 Turner Falls is the next dam down – it’s also up for relicensing, though it’s owned by a different company. When it isn’t running, the water upriver from it turns flat, which makes paddling hard.

Still, Sims doesn’t feel the dams are an obstacle to enjoying what he calls New England’s most important river.

In relicensing, he’s working on improving routes for boaters to carry their vessels around the dams. And he’s excited about the idea of new whitewater at Bellows Falls.

He says he values the electricity the dams generate. But:

“This is our river, and it’s our water,” he says. “They don’t own it, but they use it to create profits for their business. What we’re talking about in relicensing is that they pay a little rent on their fuel. And, you know, generally they know they’re going to do that.”

Relicensing for these dams has been going on since 2012. Federal regulators are expected to keep evaluating the studies and proposals involved through at least 2019.