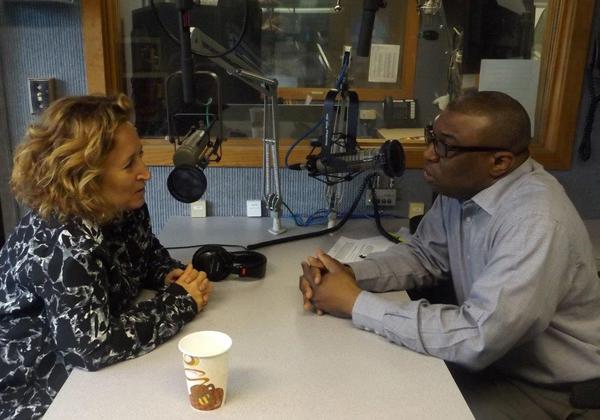 New York City filmmaker Kim Snyder’s documentary, “Newtown,” tells the story of the aftermath of the deadliest mass shooting of schoolchildren in American history. On December 14, 2012, 20 first graders and six educators were killed at Sandy Hook Elementary School, in Newtown.

Snyder followed some of the victim’s families and some town residents for three years. She says she was drawn to the project by friends who had connections with the faith community in Newtown.

KIM: I really went very reluctantly that first time up to Newtown, maybe five weeks after the tragedy, and timidly tried to sort of explore. I don’t come from news, I come from long-form documentary. And I started to forge relationships with some of the community, with Reverend Matt Crebbin and Father Bob Weiss. Of course, Father Bob was really shouldering so much burden, having buried eight of those 20 children. And I got to know him and just started to develop these relationships and do some interviews and start to film. And little by little I started to see that maybe there was some merit in doing what the news couldn’t. That could be constructive or important maybe to the world as well.

EBONG: There were three families that you followed closely, the Bardens, the Hockleys and the Wheelers. How did that come about? How did they open up to you, because it was a difficult time for them?

KIM: Well, honestly for the first eight months that I was up there a lot, I didn’t think I was going to make a film with any of the families of loss. I was sensitive to their privacy. I didn’t go up with lists. It was very organic. Somebody would introduce me to somebody, and I started to conceive of it as a look at the whole community. So for me I met the faith community, I was then introduced to some town leadership, I was introduced to the educator community, so the parents weren’t right away.

EBONG: David Wheeler [his son, Ben, was killed in the shooting] was kind of interesting because you actually saw transitions. What determined the times that you could come in and they’d allow you in, because this was a three-year project that you were involved in?

KIM: Nothing was particularly analytical, and l can be analytical. But this was so not that. It was very intuitive, and it was very much a lot of off camera conversations. It was really for me as much a story about community, about human connection and resilience. So I personally felt that as a much as it was so important to acknowledge the horror that had happened, it was important to show some of the dignity and the uplift. You know it’s really about human resilience and what people are capable of under the worst circumstances. So I had enormous respect. Obviously Newtown is 28,000 people, there are hundreds of stories. This is just a few and it was meant to be prisms, through a few teachers, through a first responder, through a priest and through several of these families of loss. To show a portrait of an entire community, which I felt hadn’t really been done around this issue of gun violence and the fallout and what it looks like for a community to have to pick up the pieces and move on. So, but to answer your questions, clearly with the Wheelers, I think the biggest challenge is that grief as a universal human experience doesn’t have a natural story arc. There is no simple beginning, middle and end. And as you know from the film part of the point is not to sugar coat that there is some neat packet of closure.

EBONG: That really struck me because I know that you are an advocate, you have a point of view. But it didn’t seem there was a call to action at the end?

KIM: Yes. We certainly want to have people sit with the film. I’m a big believer in trusting audiences. I want to create a visceral experience and something that’s emotional. That people could walk away, feel a lot, think a lot and then be inspired, if they so choose, to act in any number of ways.

EBONG: The families…have they seen this documentary?

KIM: The families who participated in the documentary?

KIM: Yes, they have all seen the film more than once, and obviously incredibly courageous and difficult for them to sit through more than once. And all the families of loss have been given an opportunity to see it privately, or collectively. What I’ve learned is, and I think what we all know is that grief works so differently, it’s so individual, and what is good for one person in their process might not be for another. But as I said, a lot of people are finding uplift including people I know in town.

EBONG: Well thank you so much Kim Synder, really appreciate your coming in to WSHU.

KIM:  Thank you so much for having me.

Democratic presidential hopeful Bernie Sanders is attracting criticism from members of Connecticut's congressional delegation after comments he made about shielding the gun industry from legal liability.

Last month, on December 13, Governor Malloy appeared on our show for his monthly visit. We talked about the budget and the upcoming legislative session, and the issues he hoped to work on in the coming year.

The next morning, everything changed.

What's Ahead For Post-Newtown Legislation?

"No one can know for certain if this senseless act could have been prevented, but we all know we have a moral obligation -- a moral obligation to do everything in our power to diminish the prospect that something like this could happen again," said Biden.

Superintendents across Connecticut have put together a document they say will help schools deal with student mental health issues. The recommendations were influenced by the events that led up to the Newtown school shootings.