The national March for Science on April 22 – and satellite events around New England – mark a departure for many scientists. Until recently, they did not consider political activism part of their job.

But over the past few years, a growing number of researchers – including targets of political attacks – say it's time to come out swinging.

Sometimes scientific research can be a slog – slide after slide of thinly sliced tissue under a microscope.

And sometimes, it’s pretty darn exciting. I happened to be visiting biologist Patricia Brennan on one of those days.

Brennan had just been delivered an orca whale penis. The return address was SeaWorld, where the animal – also called a killer whale – died of natural causes. 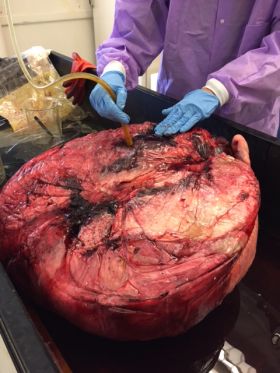 Although Brennan has spent 20 years studying the sex organs of marine animals, she’s never seen anything this big. It takes up an entire lab sink.

“So this is the tip right there,” she pointed out to her lab assistant, as they looked over the pink and fleshy organ.

It's still mostly frozen, in a tight coil, so she slowly unfurled it.

“It's not super long, it's just wide,” Brennan mused.

Brennan was so eager to start exploring that she forgot to put on her lab coat.

It’s not easy to procure this kind of specimen, and she doubts many others have. She’ll be looking for clues to mating trends and evolutionary advantages.

“Just the fact that we just don't know what we're going to find is so exciting,” Brennan said.

Brennan is a basic scientist. That means investigating how things work, and not necessarily applying that knowledge to a particular problem.

When she’s not looking at whale parts, she’s best known for studying duck genitalia – a topic that's given her a somewhat eccentric reputation. At first, that was a good thing. She got noticed by other scientists, who cited her work as influential in reproductive biology.

But then the attention took a turn. Starting in 2013, several conservative websites accused her of using federal dollars on useless research.

Brennan’s is not the only strange-sounding research to face political ridicule. Among the targets of conservative pundits – studies of robotic squirrels, aquatic plants, and scientists who study water quality and shellfish – and who once posted what they thought was a fun video of a shrimp scampering underwater on a mini-treadmill. 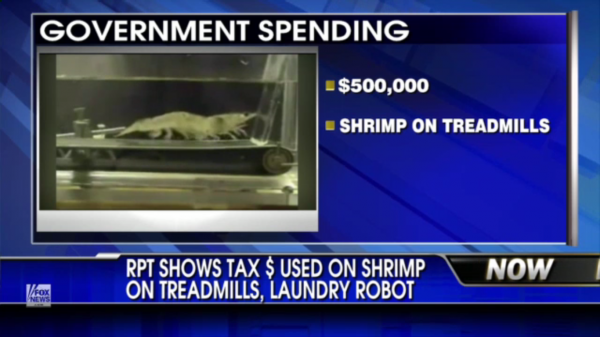 Take a Fox News report from a few years ago, in which anchor Bill Hemmer proclaimed, “We have one creative federal government!” He went on to tell his co-host, as the shrimp video played, “This is a shrimp exercising on a treadmill...Do you know how much we spent on this research?”

Much of the press was sensationalist and dismissive -- without input from scientists. Still, Brennan said she understands why a lay person might not see how obscure studies are relevant to them.

“When people ask me that question,” she said, “typically what they're asking is, 'How is this going to make money or how is it going to improve human health?'”

In the short term, it will do neither.

Basic science like hers goes into a well of knowledge that other scientists use over many years and could one day lead to a breakthrough. For example, observing rat mothers licking their pups led to dramatic changes in the care of premature human babies. A study on how honeybees forage led to better computer networks.

“In order for us to actually be able to solve problems, or make money, or innovate,” Brennan said, “we actually need to know … about how the world works.”

And she said it's high time for scientists to explain that.

After Brennan's duck research was attacked, most of her colleagues told her to sit tight and wait for it to blow over.

"It turns out it's a really terrible idea,” she said.

Because the attacks snowball. There's no counter-narrative. And the stakes for science have never been higher, as President Trump's budget threatens to dramatically slash funding for everything from health research to basic science.

That blindsided many scientists who'd been quietly – some say naively – immersed in their work.

“They think basic research is an obvious good and everyone understands that, and they sort of aren't able to understand why anyone would propose cutting something that everyone agrees is great,” said historian Melinda Baldwin, who studies political attacks on science.

While today, it’s mostly Republicans who argue against science funding, Baldwin said the trend started in the 1970s with a Democratic congressman, William Proxmire, who would give out what he called the Golden Fleece Award for projects he considered wasteful.

“It was becoming a little bit trendy to attack scientific grants that sounded like they weren't beneficial to the American public,” she said.

What’s made things worse over the last decade, Baldwin said, is the polarization of climate science, which has confused facts with politics and belief.

It doesn’t help that, for years, scientists themselves kept out of the political fray.

“Science was slow to react to the threat, and there are more threats,” said Representative Jim Cooper, a longtime Democratic congressman from Tennessee and self-described science nerd.

Cooper started the Golden Goose Awards in 2012 – a spin on Proxmire's Golden Fleece awards, but in the new version, the award honors examples of inventive federally funded science.

“The key principle is the judo principle; you use your opponents' weight against them,” Cooper said. “So when people are ridiculing science – they love to ridicule things to do with insects, or sex period – when you show that incredible discoveries were achieved by studying these arcane and unusual and weird sounding things, that takes your opponents' ridicule away and actually turns it into a benefit.”

Cooper is strongly against Trump's proposed cuts to the National Institutes of Health and the National Science Foundation. He said the private sector, which profits from science, will never support research to the extent government can. So he encourages scientists to make a fuss outside their comfort zone.

“I would try to organize the science faculties,” Cooper said. “I would try to get them to cooperate first with each other, because there's bureaucracy and jealousy sometimes."

Mount Holyoke's Patricia Brennan is now a sought-after science activist; she gives lectures and writes articles urging scientists to defend what they do – including, or especially, the weird-sounding stuff.

Brennan will be at the science march in Washington. But what she'd really like to do, is get back to the lab and take another look at that killer whale penis.