Over a year ago, residents near Merrimack, New Hampshire learned their drinking water had been contaminated by emissions from a plastics plant owned by the multinational company, Saint-Gobain.

More than a year later, some residents in Merrimack say state and federal officials haven’t done enough to protect them from the contamination. Now, a few are taking things into their own hands, going door to door.

Carol DiPirro is one of a handful of members of Citizens for Clean Water. We stand in front of her neighbor’s house, in an awkward situation. The door of the house is wide open, and we can see inside. DiPirro knocks and yells “hello?” “Hello?!”

She whispers to me “I’m not a loud person.”

DiPirro wears worn pink sneakers, has curly black hair, and holds a handful of printed flyers. She folds up a flyer, and quickly tosses it inside.

“Merrimack PFOA Concerns Health Survey,” the flyer reads. “Citizens for Clean Water is conducting a citizen-led household survey to document potential impacts of PFOA exposure in the Merrimack area,” it continues below, with a link to an online questionnaire.

The survey asks each household member essentially two questions. “How long have you lived here?” And “are you sick?”

DiPirro doesn’t relish going door to door. She does it, she says, because she’s worried.

The compounds found in wells around here are known as PFOA and PFOS, or more generally, PFAS. They’ve been linked to thyroid disease, cancer, immune system changes, and other health outcomes. DiPirro says her teenage son grew up drinking that water.

“I just cannot believe that the state is not worried about the people in this town and other towns that are popping up.”

Jim Martin disputes DiPirro’s characterization of the state. The public information officer for New Hampshire’s Department of Environmental Services says the compounds have led to “by far the largest groundwater investigation that we’ve ever undertaken in the state.”

Since toxic chemicals were found in Merrimack over a year ago, officials have tested suspicious wells all over the state. For those with above 70 parts per trillion of the contaminants PFOA and PFOS, the state has provided blood tests, bottled water, and connected hundreds of homes with wells, to public systems.

Activists say other states with the same kind of contamination have done more. 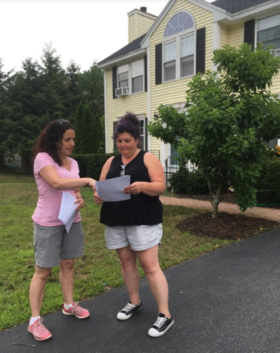 New Hampshire follows federal guidelines for how much of these chemicals are safe to drink.  It’s a level scientists say may be too high.

“I just feel like they are hiding behind that EPA while the EPA is being basically disassembled,” DiPirro said referring the U.S. Environmental Protection Agency. “Other states have taken it upon themselves to look at the science.”

According to tests of the Merrimack Village District water sources, DiPirro’s water is likely right around that 20 parts per trillion limit. If she lived in Vermont, she might be eligible for bottled water, blood testing, and other remedies unavailable to her in New Hampshire.

DiPirro hopes the results of the Citizens for Clean Water health survey will coax New Hampshire lawmakers and officials to follow Vermont’s lead.

The survey won’t be scientific. It’s susceptible to selection bias, and does not have a very large sample size.

“If the sample size is too small, you may not find a statistically significant effect even if one is present,” warns Courtney Carignan. Carignan is a research fellow at Harvard who studies contaminants like this one. DiPirro says that’s okay. Her goal is to motivate lawmakers or a university to do a more comprehensive study.

When NHPR reached out to the New Hampshire Department of Health and Human Services, the agency sent an email back, referring NHPR to the federal government, which is considering studying health outcomes on military bases affected by similar contaminants.

Such a massive study could have significant impact on the science and on policy. Its funding will depend on Congress, however. “The funding climate for this type of research is not good,” warns Carignan.

In the meantime, some states have tried to analyze the health of affected communities. The state of Vermont looked at health outcomes surrounding a former plastics plant in Bennington, and found a significant association between PFOA levels and high blood pressure.

New York State analyzed cancer incidence in Hoosick Falls, another contamination site, finding no significant associations. Both studies were limited in scope, and conducted in response to residents’ requests.

In New Hampshire, Citizens for Clean Water is trying to do things on its own. It hasn’t been easy. “There’s really just a small handful of us doing this, and some of them don’t feel well,” DiPirro says.

One organizer has immune-system problems. DiPirro has a thyroid disorder. Both illnesses may be caused by the drinking water.

Being sick, DiPirro says, makes her tired – but also motivated.