Officials in Springfield, Massachusetts are looking to create an entirely digital public library 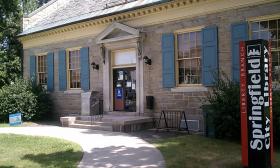 The director of the Springfield City Library is pursuing funding to use a recently closed branch library as a place where people could sit at computer terminals to access the internet and take out hand-held electronic reading devices on-loan loaded with downloaded books--but visitors would not find any paper copies of books.

People have access to e-books now at most public libraries in Massachusetts, but they must have their own computer or a personal e-reader.  Springfield library director Molly Fogarty said e-books accounted for just one percent of the library’s total circulation last year, but she believes there would be demand to justify an all-digital library.

The first all-digital library in the country opened just two months ago in San Antonio, Texas. 8,000 people signed up initially to use it. It cost $2.5 million to build.  It has an internet café appearance with 48 computer stations and 600 e-readers available to loan to library patrons.

There is no budget yet for the all-electronic library project in Springfield. Fogarty says she will explore grant applications and perhaps turn to the non-profit Friends of the Springfield Library for funding.

The plan is to put the all-digital library in the former Liberty Street Library, which was one of two branches closed earlier this year as part of a reorganization that resulted in longer hours at the remaining branches.

The city already announced plans to spend $80,000 to renovate part of the closed Liberty Street Library for use as a senior citizen drop-in center.  Work to install the wiring and space for the computer terminals could be done as part of the renovations at little added cost.  Fogarty said the senior center and the digital library could also share staff.

The proposal received informal, but enthusiastic endorsements from several city councilors who were briefed on the plan at a meeting Friday.

City Councilor Kateri Walsh said it would be an exciting first for Springfield.

Many people in the neighborhood served by the Liberty Street Library were upset when it closed, according to City Councilor Michael Fenton who says now the building can continue to be a city resource for years to come.

There are also plans to create a small park next to the Liberty Street Library.

A recent report from New Haven's Public Health Department found that in 2008, 100% of people arrested for murder in the city were under the age of 35. Half of those were under 25. But a small library, tucked into a strip mall in a neighborhood often labeled one of New Haven's most dangerous, is making a real difference with city youth.

It's family night, and about 15 kids from the nieighborhood are learning to make Afro-Carribbean folk dolls from plastic bottles.

On the other hand, and we say that a lot in the news business, libraries with books on shelves are still with us, maybe closer than you think.

Hartford's Downtown gained another dining option this week, and one that's been a long time coming. For the two institutions behind it, fresh food and good coffee are just the starters. WNPR's J Holt has more.

When the Downtown branch of the Hartford Public Library underwent a major renovation in the early two thousands, a three story tall, glass walled atrium space was built right up front, with the intention of it becoming a cafe.