It Is Hard For Kids To Tell Toy Guns From Real Guns, And That Can Have Consequences | Connecticut Public Radio
WNPR

It Is Hard For Kids To Tell Toy Guns From Real Guns, And That Can Have Consequences

Toy guns have been a popular item on Christmas gift wish lists for decades. Little Ralphie Parker from the 1983 holiday classic A Christmas Story spends most of the movie wishing for a “Red Ryder Carbine Action 200-shot Range Model Air Rifle.”

Many toy guns look more real than toy, however, which has city officials, law enforcement and safety experts across the country urging parents to use extreme caution when purchasing them for children.

Andy Simmons, a lieutenant in the Hillsborough, North Carolina, police department leads training exercises for colleagues on the force. To save a little money on training, he bought Airsoft replica guns that look similar to the ones officers carry in the field.

“And the reality really hit home when we actually received them and took them out of the box and looked at them and were like ‘Wow! This is absolutely amazing how realistic they look,” Simmons said.

Though he had purchased the Airsoft guns as a training tool, Simmons quickly realized that parents might buy them for their children as Christmas presents. He felt he had to warn parents, so on November 25, he took to the police department’s Facebook page.

Simmons does not want to discourage parents from purchasing toy guns as gifts. But with guns at the center of American conversation today, he feels people have to be more careful when purchasing them.

“It’s not like you can just buy one, read a book, and explain it. That’s not the way this works,” Simmons said. “I mean, you have to treat that as a real firearm at all times and as long as those fundamentals are there and taught, you’re good. But if they’re not, that’s when you start to run into problems.”

When children were asked to identify a real gun from a toy gun, however, more than half of them got it wrong.

Kiesha Fraser Doh is the lead researcher for that study and an assistant professor of emergency medicine in the Pediatrics Department at Emory University. After completing that study, she said she feels wary about the sale of realistic-looking toy guns.

“Are [children] going to be more likely to come across a real gun and then inappropriately handle it,” Fraser Doh asked, “or are they more likely to be mistaken as someone who has a harmful weapon when it actually is not?” 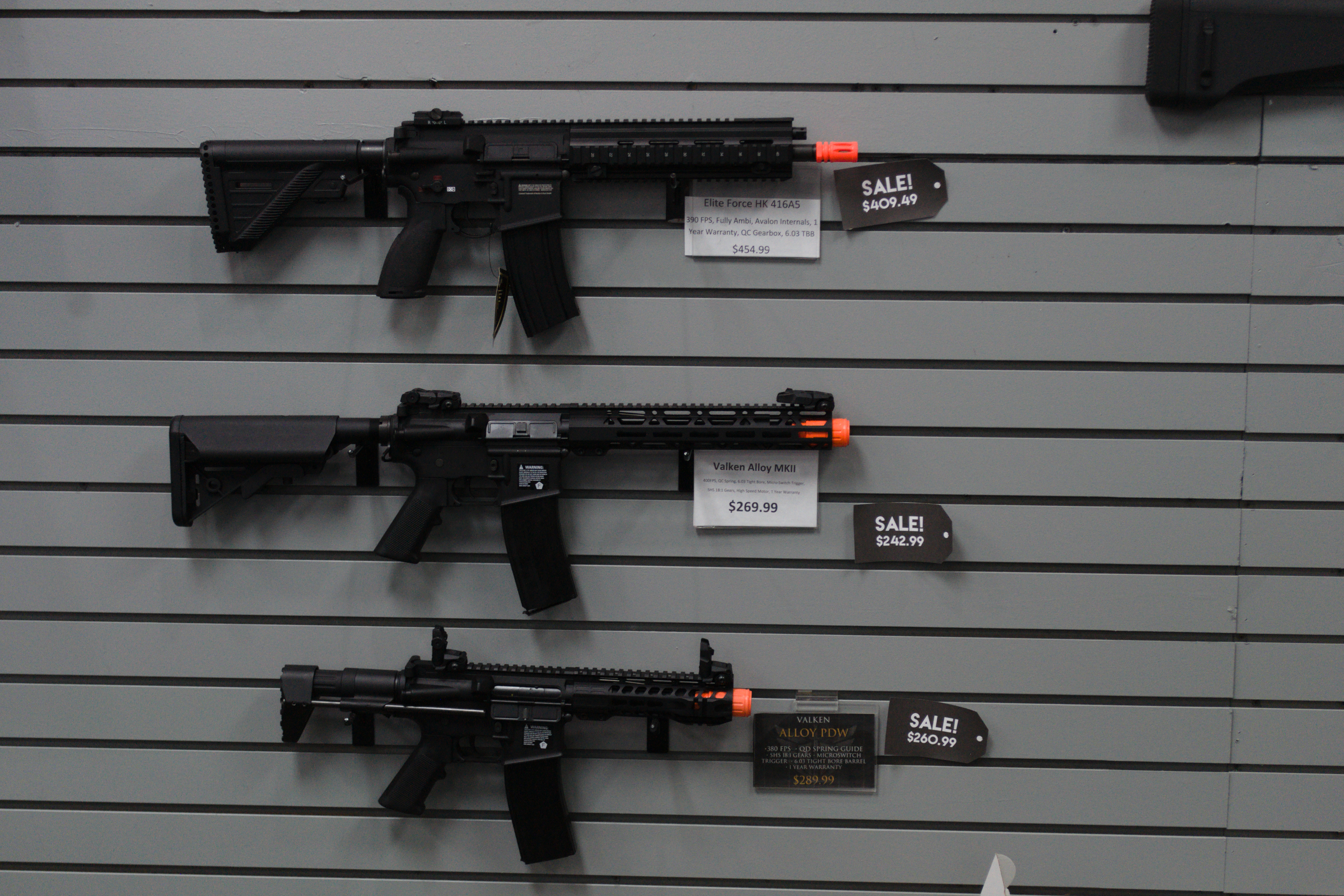 ArchAngel Airsoft in Mebane, North Carolina, exclusively sells Airsoft replicas and equipment for games, though it looks like a real gun store. That’s part of the allure.

Fraser Doh said her son recently asked for a paintball gun, which shoots small paint pellets. She couldn’t stop thinking about Tamir Rice, the 12-year-old boy from Cleveland, Ohio, who was shot and killed by police officers when they mistook his Airsoft toy gun for a real weapon.

“To be very blunt, I am African-American, my son is an African-American male, and I said ‘You know, I don’t think this is a safe toy for you to play with and I feel we should make a smarter choice,'” Fraser Doh said.

From 2015 to 2016, police officers shot and killed 86 people when they mistook a toy gun for the real thing, according to an investigation by The Washington Post. In response, several jurisdictions have enacted laws meant to avoid the confusion around toy guns.

In November, the city council in Sioux City, Iowa, banned carrying toy guns in public. After Rice’s death, New York State passed a series of laws setting restrictions on the appearance and sale of toy guns. Within the state, toy guns must be brightly colored or have striping down the barrel. In New York City, the laws are even stricter.

After the shooting in Parkland, Florida, in February 2018, Walmart stopped selling toy guns “resembling assault-style rifles” on its website. Apple and Google changed their pistol emoji to a brightly colored water gun.

Zack Chavez is the general manager of Archangel Airsoft, an Airsoft toy gun store in Mebane, North Carolina. He says the Hillsborough Police Department bought their training Airsoft guns from his shop.

Chavez says playing with Airsoft guns is a type of Live Action Role Playing (LARPing), where players dress up like a character, fictional or historical, and role play as that character would. Think: knights fighting medieval battles in a modern-day park.

“We are LARPing for the modern era. We’re fake soldiers. So, with that in mind, you don’t just go LAPRing out in the streets, rather you shouldn’t,” Chavez said. “There is a time and a place and we have a place.”

Archangel Airsoft owns a 34-acre field just a few miles away from their shop where people can play with their Airsoft guns in a controlled setting and where onlookers won’t mistake an Airsoft game for a shootout. 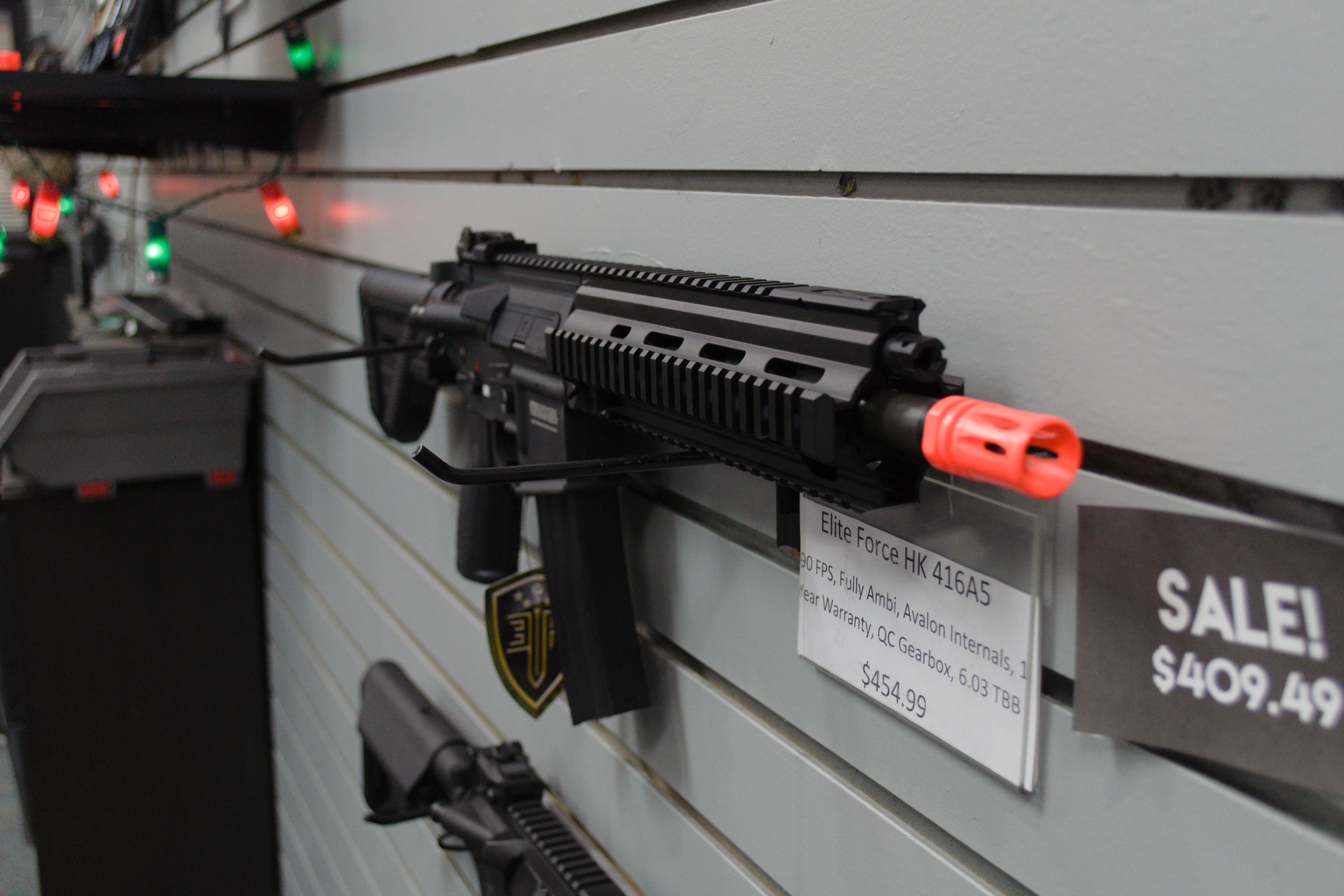 Archangel Airsoft’s HK 416A5 Airsoft gun is modeled after a real 416 A5 rifle made by Heckler & Koch. This toy Airsoft gun is a replica, except for the bright orange tip on the end of the barrel.

Chavez says Hillsborough Police didn’t go far enough in their safety recommendations. If someone wants to play with their Airsoft guns in their backyard, Chavez says they should first check their local ordinances to see if it’s restricted.

“If you are allowed, it’s a good idea to call up your local police department or local sheriff’s office and say, ‘Hey, this is so-and-so and I live at such-and-such a place, I’m just letting you know my youngins are playing with Airsofts on my property,'” Chavez said. “So, if you get any calls, this is not the militia uprising, they’re just kids playing G.I. Joe in the backyard.”

Sommers says she doesn’t like the idea of buying toy guns for her 16 year-old son, Tazion Love.

Tazion is biracial. Sommers feels his race plays a large factor in how safe he is around toy guns.

“Especially as a child of color, he has to watch his back, I feel,” Sommers said. “Because even if he says ‘Well, my friend has one and we’re in the woods shooting’ and I’m like ‘Yeah, but what happens when somebody calls the cops on you?’ It’s going to be a completely different situation, I feel.”

On an unseasonably warm November day, hunter Cole Cushman loaded his pickup truck with camouflage gear, bright orange hats and a Browning 7 mm rifle for a hunt deep in the Virginia woods.

The autumn and winter months mark deer season for much of the United States, and for Cushman and other hunters across the country, a chance to feed their neighbors through various local hunger-relief programs.

Substance Or Symbolism: The Wave Of State Bump Stock Bans In 2018

The Trump administration says it will soon place a federal ban on bump stocks, the gun attachments that allow semi-automatic rifles to fire faster. Ten states banned the plastic device after it was used by a gunman in Las Vegas to shoot and kill 58 people in 2017.

The Growing Number Of Suicides Is Dragging Down U.S. Life Expectancy

This year, high-profile incidents like the deaths of Anthony Bourdain and Kate Spade as well as clusters of suicides among young people in communities all over the country have served as a reminder that suicide is a growing public health issue in the U.S.