How To Store That Nightstand Firearm Safely

A new survey of firearm storage practices in Washington state found 40% of respondents kept at least one firearm either unlocked or loaded in their home.

That is pretty close to what other studies have found.

But an equally useful takeaway, according to the authors of a paper about the survey results, published in Preventive Medicine, were lessons on how to organize workshops promoting safe firearm storage and what messages to deliver.

Researchers surveyed participants in firearms safety workshops in sporting goods stores across Washington state between 2015 and 2018.

According to the study’s lead author, Aisha King, this led to a survey pool that was 58% male.

“Which is important because most previous interventions have been clinic-based and in pediatrician offices,” said King. “Most adults who bring children to pediatricians’ offices are female. However, a majority of firearm owners are males.”

Of the nearly 3,000 people who completed the survey, 90% lived in a household with at least one firearm. Participants were given a free storage device and a demonstration on safe storage practices.

A 2018 study in the journal Injury Prevention — with a much smaller sample size — found significant increases in safe storage device usage after community-based workshops like these.

“I think the biggest message is that these interventions can work in reaching these unique and distinct populations,” said King.

Research has shown locking up firearms could save lives, especially among young people. A May study published in the Journal of the American Medical Association found locking up guns could prevent up to 32% of firearm deaths among people 19 years old or younger.

And an October 2019 survey by APM Research Lab found 78% of respondents to a national survey supported a mandate requiring safe storage.

Study co-author Elizabeth Bennett is also Director of Community Health at Seattle Childrens’ Hospital and organizes firearm safety workshops. She says there are lessons in the Preventive Medicine study to be learned for future workshops.

Bennett said some gun owners during the firearm safety events said they leave a gun unlocked in their bedroom for protection. 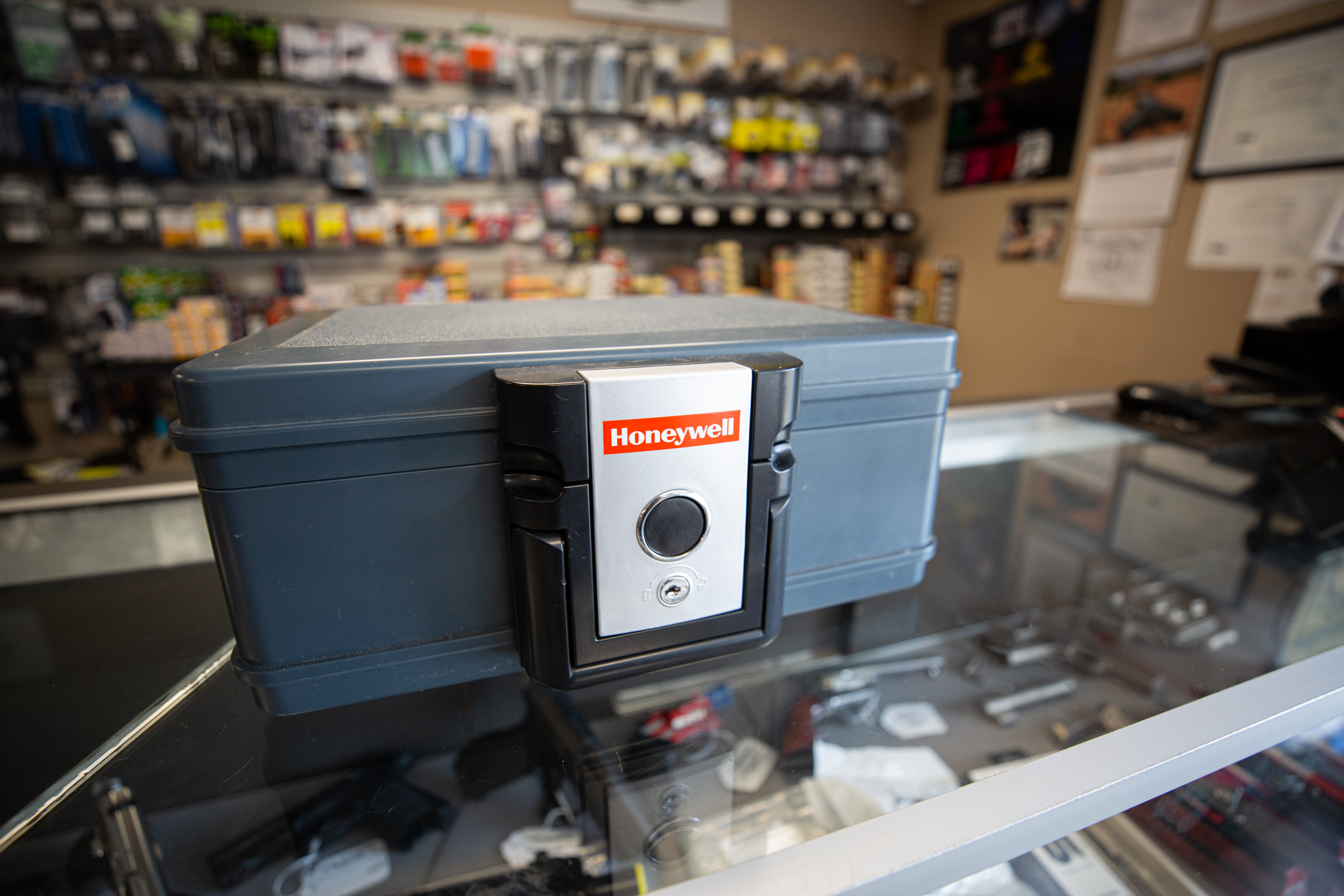 Roughly 130 million Americans have contact with a gun in their daily lives.

Survey respondents were given a choice between two types of safety devices: a lock box — which is typically the size of a portable hard drive and used to store handguns — or a trigger lock, which can be opened with a key or combination or, in some newer products, with a fingerprint.

[FILE] A guest at the Gun Safety Technology Expo in Milwaukee, WI, tests Biofire, a fingerprint-activated 9 mm handgun. The fingerprint reader, placed where someone holding a gun would naturally grip, only allows authorized users to fire the gun.

Whether they used locking devices or didn’t, owned firearms or not, 90% of all respondents preferred the lock box over the trigger lock, a cheaper option.

“That has a cost implication, and that may be a barrier as well. That’s why ours are free, we’re handing them out for free,” said Bennett. “What we hope is it serves as a motivator for a family to go ahead and keep all of their firearms locked up.”

Saturday marked seven years since the Sandy Hook Elementary School mass shooting that left 20 students and six educators dead. And, as a town came together to remember and to pray in the morning, it also came together to celebrate an unlikely football victory by night’s end.

Adult Onset Hunters: A New Type Of Sportsman Could Be The Key To Funding Conservation

A few weeks back, I found myself being pelted with snow, on an unnamed ridge, high above the aptly named Roaring River in central Idaho.

My eyes peeled for elk, I was trudging behind a friend with a rifle in one hand, trying not to trip on the trail-less mountainside.

How did I get here?

Overall crime in the United States has been declining since the early 1990s. But the same cannot be said for gun violence, which has seen a slight uptick in recent years.