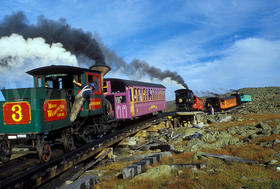 Several hiker-generated petitions have started in opposition to plans to build a hotel near the summit of Mount Washington, the Northeast's highest peak.

An online petition started by New Hampshire hiker Rachel Lewis has more than 2,700 signatures. Another asks hikers to contact the Coos County Planning Board to share their concerns.

The owners of the cog railway that runs up the mountain want to build the hotel.

The Coos County Planning Board is meeting Thursday for a "preliminary consultation" with the railway owners. Chairman John Scarinza says the meeting's purpose is to start a conversation about the project. No decisions will be made because an application hasn't been submitted. There won't be a public comment period Thursday, but Scarinza says public input will be important as the process unfolds.