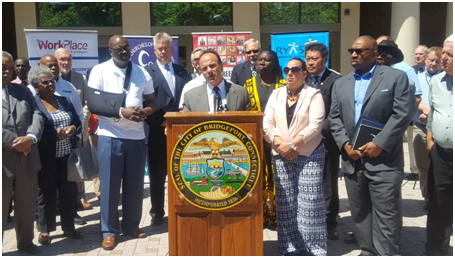 He was convicted on 16 counts of federal corruption charges stemming from his last term in office from 1991 to 2003.

Ganim says the issue is close to his heart and he wants to help others who are just getting out of the corrections system.

“I found, in my life, after being locked up, coming back, with all the benefits that I have, of a strong, huge family that's not exactly poor, of a professional career, knowledge and education, that even for me, the challenges were, although more subtle than others have faced, were there nonetheless."

To incentivize companies to hire ex-felons, Ganim is looking to create a fund that would cover the cost of their salaries for the first few months.

The mayor has asked the city council to approve $50,000 in grants. The initiative has also applied for $8 million in federal grant money, and is seeking corporate donations as well.  The mayor also called on local businesses to sign a pledge that says they're willing to employ ex-felons.

An ex-convict could be elected mayor when voters in Bridgeport head to the polls on Tuesday. The city's former Mayor Joe Ganim spent seven years in a federal prison for corruption. Now he's staging a dramatic comeback. He won the city's Democratic primary against a two-term incumbent last month.

A little after 9 p.m., Joe Ganim took to the stage at Testo's Restaurant in Bridgeport to declare victory.

No one can argue the charisma of former Bridgeport mayor Joe Ganim. He served five terms as a beloved leader in a city long plagued by  crime, poverty, and corruption, much of the corruption under the Ganim administration.