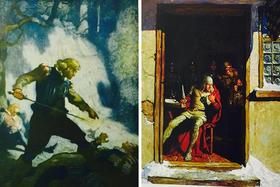 The FBI is seeking the public’s help in solving a significant New England art theft.

The head of the Boston FBI office, Special Agent in Charge Vincent Lisi announced a $20,000 reward for the return of two N.C. Wyeth paintings stolen from a private collector in Portland, Maine.

" Anybody who has any information about these paintings, the whereabouts, or who may have stolen them can contact the FBI via our online tip line, or telephone directly," said Lisi.

Four of the six paintings that were stolen from a home in Portland in 2013 were recovered at a pawn shop in Beverly Hills, California.  Three people have been charge in connection with the case.

After admitting to one of the most surprising art thefts in recent history, two men have been sentenced to 6 years and 8 months in prison. They are part of a Romanian gang that stole seven works by masters including Pablo Picasso, Henri Matisse, Claude Monet and Paul Gauguin from a Rotterdam museum last autumn.