Family-run Market To Close As Casino Comes To The Neighborhood 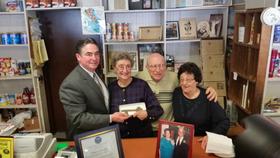 A neighborhood market that would be in the shadow of the MGM Springfield casino is closing after 73 years.

Springfield Mayor Domenic Sarno who has been coming to Albano’s Market since he was a boy brought the Key to The City and a proclamation Wednesday to honor its owners as pillars of the South End Italian-American community.  Filomena Bruschi and her sister Theresa D’Angelantonio took over the small business from their parents in 1942 and are now retiring after accepting an offer to sell to a developer.

" I spoke to Domenic and said we want to leave very quietly, but I guess we are not going to leave quietly," said Bruschi with a laugh  as the tiny store filled with well wishers Wednesday.

The sisters were known in the neighborhood for their generosity to people in need.  The market was famous for frozen Italian lemonade made from a secret family recipe.