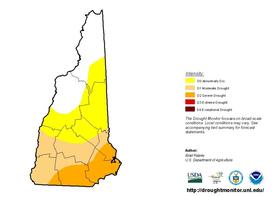 The region's ongoing drought has forced state officials to restrict or ban outdoor water use in 54 New Hampshire towns and cities.

The state's drought management team has classified the North Country and the White Mountains as “abnormally dry,” while four counties in the southern tier are suffering severe drought conditions.
Jim Martin, with the Department of Environmental Services, says such seriously dry conditions are unusual in New Hampshire.
"We need people to be very vigilant about how they are using their well water and even public water," Martin said. "If you live in a town that has instituted water restrictions, those apply not only to public water but also private wells."
The National Oceanic and Atmospheric Administration predicts the drought will continue through October.
An updated list of towns with water bans or restrictions is available on the NH DES website.
Copyright 2017 New Hampshire Public Radio. To see more, visit New Hampshire Public Radio.

One of the challenges to stemming the flow of pollution into Lake Champlain is that so much of runoff comes from disparate sources across the vast watershed. And one source of water pollution is hidden-in-plain-sight: roads.

Michigan is not the only state with a water crisis on its hands. Right now, communities in New York, New Hampshire, and Vermont are grappling with their own water contamination challenges. It’s just that for these states, the problem does not stem from corrosive water or aging lead pipes, but from a toxic chemical known as PFOA.