The Disconnect Between Banning High-Capacity Magazines And Decreasing Deaths

The day in 2012 that a gunman killed 27 people and then himself in Sandy Hook, Connecticut, he didn’t just use a semi-automatic rifle. The shooter had an array of handguns, shotguns and rifles, along with hundreds of rounds of ammunition.

Connecticut politicians acted swiftly, passing Public Act 13-3, known as the Sandy Hook Bill. Among dozens of gun provisions, it added more than 150 guns to the state’s existing ban on what the state defined as assault weapons and outlawed magazines that could hold more than 10 rounds of ammunition.

Various states, and even the federal government for a time, have passed similar laws banning certain guns and gun accessories. Still, mass shootings have persisted.

‘A Lot Of People Were Mad’

Doug Odishoo, owner of the Delta Arsenal gun shop in Wallingford, Connecticut, remembers back in 2013 when word spread throughout the state about the Sandy Hook Bill, which proposed heavily regulating high-capacity magazines and guns considered assault weapons.

His customers were “pissed,” he said, and many went to the capitol to protest.

State politicians thought that banning certain guns and limiting the number of rounds a shooter can fire without reloading could prevent mass shootings. Odishoo disagrees.

“A lot of people were mad,” Odishoo recalled. “It still didn’t solve the issue that [state politicians] were trying to fix.” 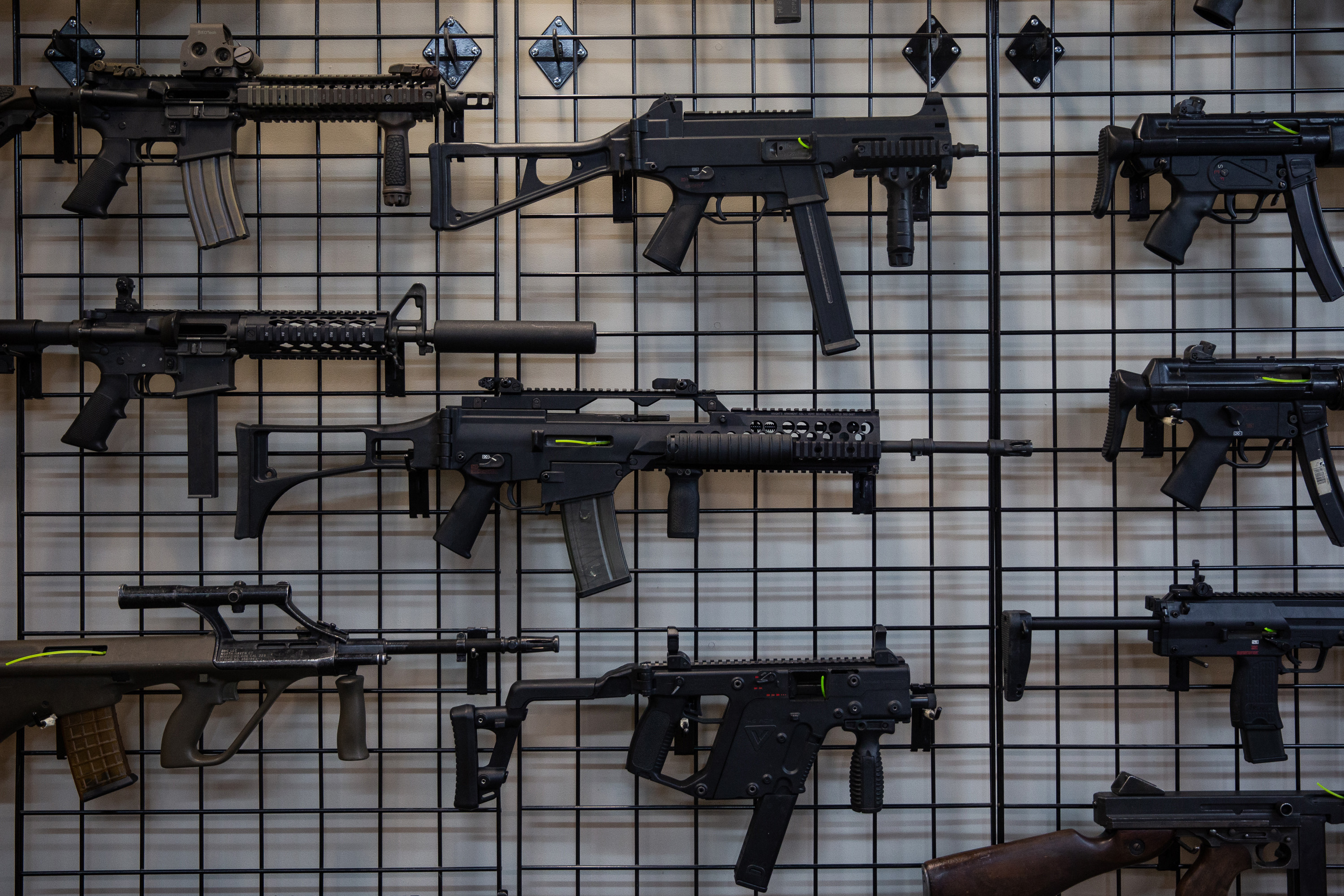 An assortment of machine guns with high-capacity magazines sit on racks at Delta Arsenal, a gun shop in Wallingford, Connecticut. While the otherwise outlawed guns can’t be purchased by the public, law enforcement and military officers can purchase them.

Lanza was the 20-year-old gunman responsible for the 2012 Sandy Hook elementary school shooting. Lanza’s mother legally purchased multiple guns and ammunition, but Lanza himself did not have a permit to carry or own a gun.

Connecticut, together with six other states and the District of Columbia, has a ban on firearms they define as assault weapons. But with a lack of uniformity across state lines and an expired federal ban, it’s not clear if these types of policies actually decrease mass shootings.

And while assault-style rifles often receive attention in the wake of mass shootings, many mass shooters have used a combination of semi-automatic rifles, shotguns, pistols and handguns.

A 2018 JAMA study assessed 248 active shooter incidents from 2000-2017, (excluding the Las Vegas, Nevada, and San Bernardino, California shootings.) Semi-automatic rifles were used in 61 of those incidents, with 37 involving multiple firearm types. Handguns were used in 187 incidents.

The Limits Of State And Federal Bans

In 1994, the federal government enacted a ban on assault weapons that lasted 10 years, as a part of the Violent Crime Control Law. Officially known as the Public Safety and Recreational Firearms Use Protection Act — and colloquially as the Federal Assault Weapons Ban (AWB), the legislation defined certain semi-automatic firearms as “semiautomatic assault weapons” and magazines that can hold more than 10 bullets as “large capacity.”

The AWB was intentional yet insufficient: 118 gun models were banned, but more than 650 were exempted. Thanks to a grandfather clause, anyone who possessed a newly designated “assault weapon” could keep or transfer their firearm to another authorized individual. Gun manufacturers could comply with the ban by designing guns that were near-replicas of banned guns, minus a few features that would otherwise make them illegal.

Loopholes like these are what Mark Gius, an economics professor at Quinnipiac University, said made the AWB ineffective. It did not notably decrease mass shooting fatalities, crime or access to guns.

“People have to remember that assault weapons are used in very, very, very few murders,” Gius said, adding that those guns and high-capacity magazines are “totally legal” in most states.

State laws, however, did not result in any decreases in mass shootings, according to Gius’ study. But an analysis done for CNN by Michael Siegel at Boston University found that states with high-capacity magazine bans had lower rates of mass shootings.

“The impact of state laws is always problematic because if your neighboring state doesn’t have an assault-weapon ban, especially if they don’t have private sales background checks,” Gius said, “you could just buy an assault weapon off anybody and then bring it back and nobody would even know.”

When it comes to mass shootings, many states don’t report the specific types of guns that are used to injure and kill people. Gius says that makes it challenging for researchers to compare and compile data.

Connecticut has both a “deadly weapon” and high-capacity magazine registry, but that’s not the case in other states. The private registries are accessible to law enforcement but doesn’t offer researchers insight about who owns these items and why.

California was the first state to enact an assault-weapons ban in 1989. It was followed by bans in Connecticut, Hawaii and New Jersey that all preceded the 1994 federal ban. These state bans remained in place after the federal AWB expired in 2004. Maryland, Massachusetts, New Jersey, New York and Washington, D.C., all passed their own bans in the years that followed.

Those seven states, Washington, D.C., Vermont and Colorado have banned and designated magazines that can hold 10-15 rounds as “large capacity.”

In February, ahead of the one-year anniversary of the Parkland shooting, lawmakers reintroduced the Keep Americans Safe Act. Originally introduced after the 2017 Las Vegas mass shooting, the federal bill focuses on banning and classifying magazines with more than 10 bullets as high capacity. Like Connecticut’s bill, it does not prohibit the manufacturing, transferring or possession of high-capacity magazines for military and law enforcement.

When the law went into effect in April 2013, anyone possessing a magazine that could hold more than 10 rounds was required to register it in order to continue to lawfully possess it. The bill also expanded the state’s definition of “assault weapon” to include more than 150 additional gun models. Transferring ownership, purchasing and selling those items after the bill passed became illegal.

“So rather than face potential liability, they erroneously registered high-capacity magazines when they didn’t have [one],” said Giannone.

The Connecticut database is accurate in terms of who owns what and how many, according to Giannone. But it is not an accurate picture of the number of “high-capacity” magazines in the state.

The Danger Of Fixating On Mass Shootings

When it comes to reducing mass shootings through legislation like the Sandy Hook Bill, it’s more a matter of perception versus reality.

“Although most people associate assault weapons with mass shootings, most of the guns used are handguns,” Gius said.

And while there are notable instances of shooters only using semi-automatics, the mass shooters in Binghamton, New York, Fort Hood, Texas, Tucson, Arizona, Oakland, California., Oak Creek, Wisconsin and Charleston, South Carolina, solely used handguns to shoot and kill their victims. And while national focus is often on mass shootings, fatalities from other types of gun violence happen every day without making national headlines.

As a Connecticut state representative, Doug McCrory was one of three Democrats to vote against the bill, even in the wake of Sandy Hook. 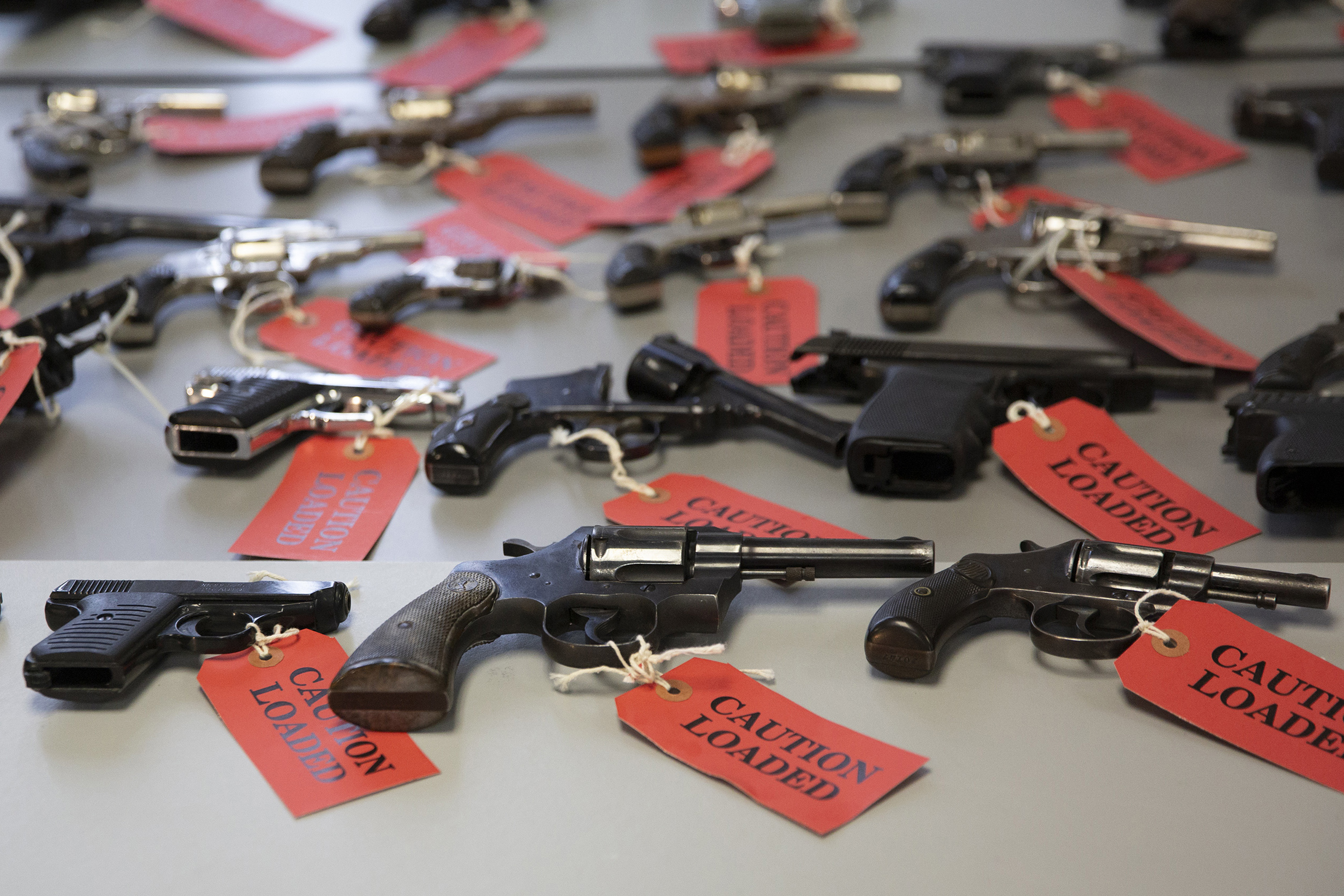 More than 80 handguns were turned in at a December 2018 gun buyback event in Hartford, Connecticut, compared to four assault rifles.

“We all want to reduce deaths and injuries from guns,” Gius said. “And so what you really want to look at is … the best policies that could reduce overall gun violence.”

Mass shootings ultimately accounted for less than one percent of all murders in 2017.

“You don’t want to just focus on a little tiny aspect of gun violence,” Gius said, “you want to focus on the bigger broader picture.”