DeLauro says the conditions were worse than what they had imagined. She described seeing children separated from their parents in “a sea of mylar. It looks to me like tinfoil. Because there are these mylar blankets which they give to kids who are sleeping and sleeping on concrete floors.”

Dr. Steven Marans of the Yale Child Study Center was also on the panel. He says trauma like this puts kids at risk of substance use disorders and criminal behavior later in life.

“All of you know the idea of the absence of a parent being replaced by the cuddly toy or the soft blanket. There’s something really quite powerful about imagining the plight of children who are in the throes of the most overwhelming experience of their lives, that all they have to cling to is a thin, aluminum-like foil. ”

Marans says children need to be reunited with their families to stop the immediate trauma of separation, so healing can begin.

“Every day that goes by increases the long-term damage. Because these same kids who are unable to be helped to recover will lead not only to PTSD but permanent inability to properly regulate feelings and thoughts.”

Marans warns that parents experience trauma, too. Esty says during a visit to a medium-security prison, they met with 15 sobbing mothers. 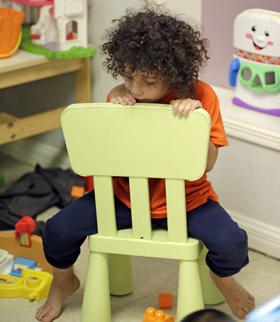 “Their stuff is documented and must be returned to them out of a lock-up locker. But their children, they’re given a number and shipped someplace else.”

Esty says parents don’t know where their kids are because federal databases are not set up to match children with the family members from whom they’ve been separated. The Trump administration has yet to announce a reunification plan.

DeLauro said she’s asking a House committee for funding to reunite more than 2,400 immigrant children with their families.

The congresswoman also said a lack of translators at the detention facilities made it difficult to speak with families, and that Congressman Himes had to step in to translate.

“That Jim Himes, God bless him, could speak Spanish so he did translating for us, which was really terrific and allowed us to be able to communicate.”

While Immigration Policies Are Defined, Many Families Along The Southern Border Can Only Wait

It’s a hot day in Brownsville, Texas. U.S. Rep. Chellie Pingree of Maine sits shotgun in a silver Mercedes SUV, talking to her driver, a Brownsville city official. She turns around, leaning over her left shoulder, and explains what it was like earlier in the day when she spoke with a group of migrant mothers in a nearby U.S. Immigration and Customs Enforcement (ICE) detention facility.

The controversy over President Trump's executive order to end the policy of separating migrant families who cross into the U.S. illegally is shifting to the courts.

Several members of Connecticut’s congressional delegation are calling on the Trump administration to step up efforts to reunite families separated as they crossed the southern U.S. border.