A dead humpback whale is floating in a Lubec cove. Scientists are eager to find the cause of its demise, as the discovery comes at a time of increasing mortality rates for the species.

People who have seen the whale estimate that it's about 26 feet long. Ralph Dennison is the Lubec Harbormaster. He visited the shore at Boot Cove, near Quoddy Head, to get a view of the animal.

"It was just starting to get kind of bloated,” Dennison says. “It had a seagull on it, starting to eat some of the carcass, and there was some eagles flying around, and bits of it starting to wash to shore. That wasn't pretty but that's the way nature is I guess."

Dennison, who also captains a whale watch boat, says judging from the large size of this whale's pectoral fins, it was likely a humpback. 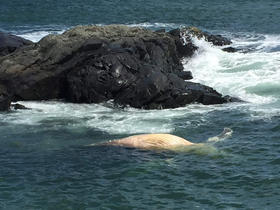 Rosemary Seton of Allied Whale – a research unit at the College of the Atlantic – confirms that it was a humpback whale, and her team was able to gather a bit more information when they waded out to the animal on Wednesday.

Seton says that the team was unable to shift the whale, which was floating on its back, enough to see whether evidence of the cause of death might be found on submerged areas of the animal. The question is gaining urgency, as humpbacks are one of several whale species whose mortality rates have risen in recent years.

The endangered northern right whale is in the most perilous condition, with only 450 left on the planet. North Atlantic humpbacks are much more abundant – over 10,000 are estimated to swim off the coast of the United States and Canada.

Even so, Seton says they need close attention too.

"This is a very robust population, so it can handle some of these deaths,” says Seton. “But still, you don't ignore it when you've got twice the numbers dying that you usually get." 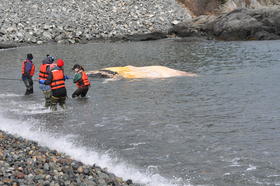 One year ago the National Oceanic and Atmospheric Administration declared an "Unusual Mortality Event" for the humpback, the right whale and the minke whale. Federal scientists said the number of humpbacks struck by ships had risen to four times the usual average.

Research into underlying causes is ongoing, she says.

"Has where the whales gone changed?” Fauquier asks. “So have their distributions changed? Has their food changed.? Has where ships go or fishing goes changed? And (we are) trying to evaluate that larger, bigger picture."

Seton says she is hopeful that her team will be able to gather more samples from the Boot Cove whale, ideally beaching it and performing a complete necropsy.

One of Connecticut’s most highly decorated World War I veterans is featured in a new animated film, opening in theaters nationwide Friday. He warned his fellow soldiers of a possible gas attack, located wounded men in the field, and even helped to catch an enemy spy hidden in the Allied trenches.

Did you know 75 percent of animals in the ocean glow?

A Deep Dive Into The World Of Insects

There are an estimated 10 quintillion insects living on the planet right now-- That's 1.4 billion insects for each human. If they decided to take over, there's nothing we could do to stop them. Fortunately, they seem relatively content to share their planet with us.