CT Democrats Say They'll Have A Budget This Week 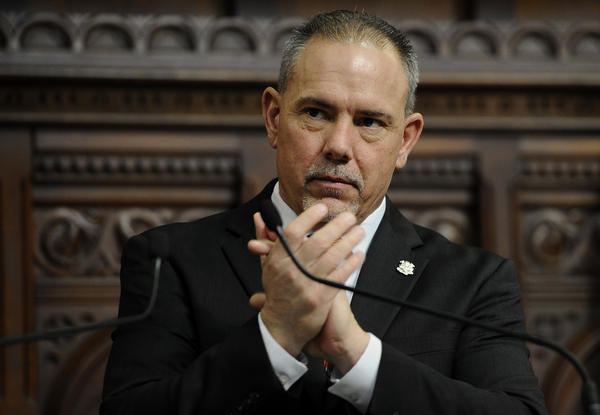 As Connecticut approaches the end of the second month without a state budget, Democratic legislative leaders say they’ll present their revised final state budget plan this week. The proposal is expected to include a controversial sales tax increase.

Democratic House Speaker Joe Aresimowicz of Berlin says members of his caucus have crunched the numbers and have concluded that there’s no way to close the projected $3.5 billion deficit in the state’s overdue two-year budget without new sources of revenue. But the sales tax increase would be less than House Democrats had called for in their initial budget proposal. That had been an increase from the current 6.35 to 6.99 percent.

“I would say there is a very good shot it will be less than 6.99,” Aresimowicz said. “I don’t know what level it would be until I finish talking with members.”

Senate Democratic President Martin Looney of New Haven says there’s a possibility that to pull in more revenue the sales tax may be extended to items that are not now being taxed.

“And there are two questions there. First of all will if it be extended and secondly if it’s to be extended at what rate? Would it be at the full rate or some reduced rate? So those are also on the table as potential sales tax issues.”

Looney says these issues will be finalized at a caucus meeting before they present their proposal. But Democratic Governor Dannel Malloy is skeptical.

“I don’t think they are that close quite frankly. Any perusal of budgets that I have been personally involved in would call for something approaching a billion dollars in tax increases, and that’s leading with revenue”

Malloy says he absolutely against balancing the budget with new taxes. “A billion dollar increase in tax revenue is not acceptable. Revenues have come in short. We have to examine our expenditures.”

This is a position that’s also held by Republicans who have an 18-18 tie in the Senate. But Democratic leaders say they are not deterred. They say they are confident that after meeting with their caucus this week they will have a final budget plan. Speaker Aresimowicz is predicting the plan would be ready for a vote within the next three weeks. That would prevent the governor’s cuts to state funding for cities and towns that scheduled to take effect by the end of September.

In Absence Of State Budget, Malloy To Zero Out Funding To 85 Districts

School districts could see even more severe cuts than originally proposed in Governor Dannel Malloy's executive order, which has proposed to slash another $100 million from schools.

Connecticut seems no closer to a budget deal despite the adoption of a new labor concessions package. Meanwhile, the state’s towns and cities are still having to pay their bills.