In Conn., Ban On Direct Sales Hasn’t Slowed Tesla Down 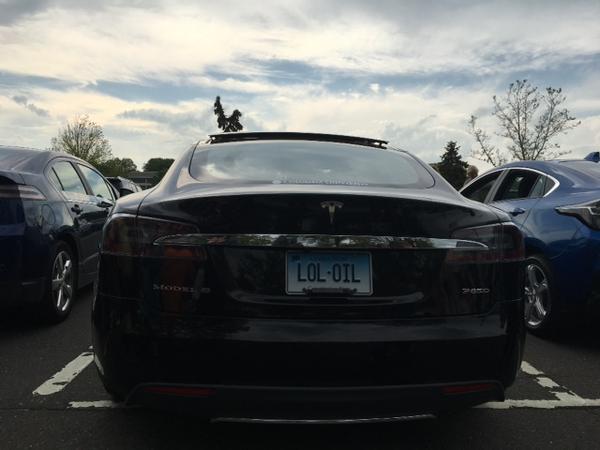 The electric car company Tesla has convinced a handful of prime states, including Massachusetts and New York, to exempt it from laws that require car companies to sell through dealerships.

One state they can’t get -- and would like to -- is Connecticut, though people in the state are buying Teslas anyway.

Avi Kaner showed off his new Tesla at a recent electric vehicle rally in Westport. "It has every bell and whistle you can imagine,” he said.

Kaner bought his car from Tesla’s website, and then it was shipped to Connecticut from a showroom in New York.

“It really irked me that I could not legally buy this vehicle in Connecticut. When I purchased the vehicle, I received it with a New York license plate.”

Kaner says Tesla handled all the DMV paperwork as compensation. He even got a personalized Connecticut plate.

“LOL OIL. Laughing Out Loud Oil. I’m kind of laughing at the fact I can have such a wonderful high performance vehicle that uses no gas.”

Tesla’s tried for two years to get Connecticut lawmakers to pass a bill to give the company an exemption to dealership laws, but the bill never came up for a vote. State Rep. Jonathan Steinberg (D-Westport) says car dealers fought the bill hard.

“Frankly, the dealers were very well-entrenched. They have wonderful relationships with their elected officials and made it clear they weren’t interested in having a different competitive model in the marketplace.”

Car dealers say it’s about fairness, not competition. Leo Karl owns a Chevrolet dealership in New Canaan, and he’s upset that Tesla wants to go around dealers like him.

“My entire livelihood is invested in my business. I work hard every day on behalf of my customers, and I feel threatened by Pandora’s box opening in my industry and letting this happen.”

Karl says Tesla wants to play by its own rules, not the state’s rules. He thinks it would be easy for Tesla to open its own dealerships under Connecticut law.

“They just find a local Connecticut business person that they believe shares their ideals and who’s accountable to the consumers that do business at that store.”

Tesla says it does consumers a favor -- it sells directly and cuts out the middleman. The company also says it could create hundreds of jobs in Connecticut and bring more sales tax revenue at a time when the state’s in a budget crisis.

Avi Kaner -- the proud Tesla owner at the Westport rally -- says Connecticut’s law didn’t stop him from getting a Tesla. And it won’t stop all the people who’ll get a Tesla next year when the company releases a much cheaper model.

For years, Connecticut tried to stop Amazon from selling in the state unless they collected state sales taxes. It didn’t work.

Tesla says it’ll try again to get an exemption to open showrooms in Connecticut. And later this year, the company will open a gallery in Greenwich where people can look at Teslas. And if they want one, they can either go to another state, or they can just go online.

Beth Ostrowski spends most of her day in her car.

A last-minute offer by electric carmaker Tesla Motors to open a regional distribution center in Connecticut may not be enough to persuade lawmakers to pass a bill allowing the company to sell its vehicles directly to consumers.

Figuring Out How to Target Distracted Driving in Connecticut

It’s national distracted driving awareness month again, which means police will be out on the state’s roads and highways checking to see if you’re using your phone while you're driving. But it’s a targeted effort and not all police departments participate.

VW Will Buy Back Some Diesel Cars, Announcing A Deal With U.S.

A buyback of emissions-cheating cars was one solution Volkswagen offered in federal court Thursday, outlining an agreement between the carmaker and the Justice Department over hundreds of thousands of diesel vehicles that were sold in the U.S. despite not meeting pollution standards.

Car owners would be able to choose between having their vehicle fixed or accepting a buyback; financial details weren't revealed about the plan, which both the government and VW are calling an "agreement in principle."

A Tesla For The Masses? Orders For Model 3 Top 100K In First Hours

Tesla, the maker of electric vehicles, Thursday night unveiled its mass-market Model 3. The car is expected to have a range of 215 miles at a base price of $35,000 ($27,500 after federal tax credits).

Tesla CEO Elon Musk told a crowd of loyal fans in Hawthorne, Calif., he is "fairly confident" the vehicle will go on sale in 2017. That the assembled crowd laughed at the statement is a sign of the near-cult following Tesla (and Musk) enjoy.