Kevin O'Neill is driving his electric car down a road in Cumberland when he presses down harder on the gas pedal. He's doing this to prove his point that electric cars are more fun.

“From dead zero, you’ve got fantastic acceleration,” O'Neill said. "I don't like to drive fast, but I do like to feel that it's kind of zippy."

O'Neill is the president of The Conference Exchange, a software company in Cumberland, but he's also an advocate for climate action.

He said he bought his Chevy Volt a year and a half ago to reduce his carbon footprint. He also decided to buy 100 percent renewable electricity to power his business.

O'Neill's environmentally friendly choices are what some state legislators are trying to encourage for the entire state with a carbon pricing bill called EnergizeRI.

“The kids who are born today at Women and Infants Hospital in Providence, they face what could be a really really scary and dangerous future," Democratic State Rep. Aaron Regunberg of Providence and sponsor of the bill, said. “Legislation like this would be the most ambitious climate action that we’ve got at our disposal as a state right now.”

The bill requires oil and gas companies to be charged $15 per ton of carbon emissions their products release. Most of the tax revenue would be given back to families and businesses to protect them from increasing energy costs passed on by the companies. However, the rebates would serve mostly as a financial incentive to use less fossil fuels.

The idea is Rhode Islanders who are living more sustainably would be paying less money for energy, which means they would have more cash left over in rebates.

O’Neill said that extra money would help spur the economy.

“If you had $10 a month coming back to you, for example, from the state rebate, would you really use that to go out and buy some extra gasoline or something? I don’t think so. You’re probably going to go out and buy an extra lunch or an extra coffee," O'Neill said. 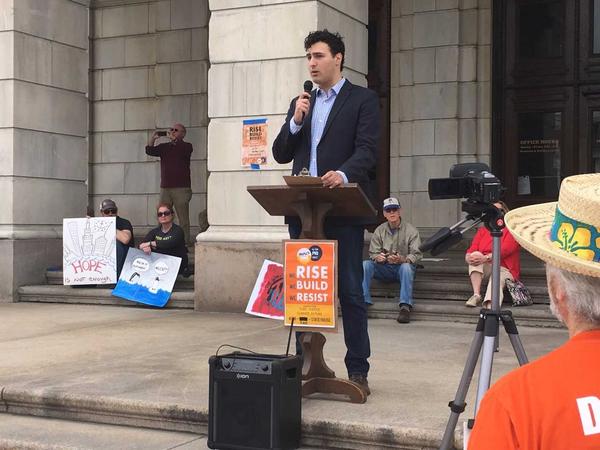 Regional Economic Models Inc, a company in Massachusetts that assesses public policy, expects the bill to add about 4,000 jobs to Rhode Island’s clean energy sector by 2040. Billions of dollars would also be kept in-state because Rhode Island would be importing less fossil fuels.

However, not everyone is convinced that this bill would have a positive economic impact.

“The green jobs is a myth. When you extract money from the economy for the dozen or two green jobs you might create, you’ll lose hundreds of jobs in the overall economy. That’s a proven fact," Mike Stenhouse, CEO of a conservative advocacy group called Rhode Island Center for Freedom and Prosperity, said.

The center released a report last year that looks at how Rhode Island’s renewable energy goals would impact the economy. The study found the carbon pricing bill would contribute to an increase of nearly $700 million to $900 million in electricity costs paid for by families and businesses. The report said the state could also lose 4,000 to 6,000 jobs.

“When you increase costs of doing business, that tends to have a disincentive toward jobs. That’s pretty much an economic reality," Stenhouse said.

However, O’Neill says gas prices for his software business would only go up a few hundred dollars. Based on the number of employees he has, his company would be getting back a couple thousand dollars in rebates, which would cover the higher costs.

O’Neill has also done the math for other businesses.

“Basically, this is not going to have the significant impact on the cash flow of most businesses in Rhode Island. It’s either going to be slightly positive or slightly negative," O'Neill said.

Another part of the bill would create a clean energy and jobs fund to invest in energy efficiency programs to help small businesses and lower-income residents live more sustainably.

Stenhouse said that’s proof green energy still costs too much, and right now, the fossil fuels industry is the one that makes the most economic sense.

“The left has found all kind of creative ways to take money out of our pockets in order to fund an industry that right now can’t stand on its own. I hope it does someday, I honestly do. It would honestly be better for earth, but it can’t stand on it’s own right now so let's not chop the legs out of the one energy industry that is standing on its own," Stenhouse said.

For Regunberg, the bill is ultimately about addressing climate change, which he said is a moral crisis.

“We know that in reality the science says we needed to have passed this yesterday. We don’t have a lot of time to avert the worst disasters of climate change, we’ve got to act really fast and so we’re hoping we can keep building and get this passed in time to make a difference," Regunberg said.

This is the second time Regunberg has introduced the EnergizeRI Act. Right now, its future remains an open question.

If it’s not passed this year, Regunberg said he plans to keep pushing for it.

Lawmakers in Connecticut and Massachusetts have introduced similar legislation.

A federal judge in Washington, D.C., ruled Wednesday that the Trump administration failed to follow proper environmental procedures when it granted approval to the controversial Dakota Access Pipeline project.

It's a legal victory for the Standing Rock Sioux tribe and environmentalists, who protested for months against the pipeline. Oil started flowing through it earlier this month. The tribe fears that the pipeline, which crosses the Missouri River just upstream of its reservation, could contaminate its drinking water and sacred lands.

Three Mile Island Nuclear Power Plant To Shut Down In 2019

The company that owns the Three Mile Island nuclear plant, site of the worst nuclear disaster in U.S. history, announced that it plans to shutter the facility in 2019 unless the state of Pennsylvania steps in to keep it open.

The plant near Harrisburg, Pa., hasn't been profitable for the past five years, according to owner Exelon Corp. The company announced last week that it failed to auction off future energy production from Three Mile Island for the third year in a row.