Atlantic Bluefin Tuna Stocks Are Rebounding — But Should The Quota Be Raised? | Connecticut Public Radio
WNPR

Atlantic Bluefin Tuna Stocks Are Rebounding — But Should The Quota Be Raised?

ShareTweetEmail
Listen
Listening...
/
Atlantic Bluefin Tuna Stocks Are Rebounding — But Should The Quota Be Raised?

Fishermen up and down the New England coast say it has been decades since they’ve been able to catch so many Atlantic bluefin tuna, so fast. Once severely depleted, populations of the prized sushi fish appear to be rebuilding.

Now the industry and some scientists say the international commission that regulates the fish can allow a much bigger catch. But some environmental groups disagree.

Peter Speeches is a commercial fisherman who sails his 45-foot boat, the Erin & Sarah, out of a Portland marina. His rods and reels are racked, though, and the boat has been docked the past several weeks. That’s because tuna fishermen reached their fall catch quotas earlier than ever this year.

“There was more fish here than I’ve seen in 30 years, and I fish virtually every single day. This year we caught probably the same amount, but in half the time,” he says.

This year, Speeches says, the thousand-plus boats that fish bluefin off New England were blessed by day after day of good boating weather. Forage fish such as herring and pogies showed up in numbers — and they swam relatively near to shore, bringing the big tuna in to feast, where smaller boats could get at them pretty easily.

Above all, he says, there were just a whole lot of bluefin around, and biting.

“They were everywhere. When they hit this year in July, they hit from the Canadian border to New Jersey, and they were thick. And they got caught fast,” Speeches says.

And fisheries scientists agree. After charting a strong bluefin presence in 2016, preliminary data for this year suggest even better.

“The increase has been incredible. Just incredible,” says Walter Golet, a jointly-appointed researcher at the Gulf of Maine Research Institute and University of Maine.

Golet compares the recent trend to big dropoffs seen a decade ago.

“And then since that time, they started to show up a little bit earlier in the season, to the point now where they’ve shown up in abundance,” he says. “It appears we’re almost back to where we were in the 1990s.”

“It’s really difficult to say clearly what environmental changes could have led to this current increase in abundance,” says Clay Porch, a federal scientist who leads bluefin stock assessments for the International Commission for the Conservation of Atlantic Tunas, or ICCAT. That’s the body that has been setting quotas in a 20-year effort to rebuild two bluefin stocks — those caught in the eastern Atlantic and those caught here on the west side.

Bluefin are big, fast, warm-blooded fish that can swim from the Bahamas to Norway in 54 days. Porch says that charting their locations and numbers is an exercise in predicting the unpredictable. But the trend lines are clear, he adds: Recovery efforts since 2010 are showing some real success.

“They’ve really taken a lot of steps to get better control on the fisheries and catch bigger fish instead of a lot of small fish, and ratcheted down those quotas. So the combination of all those things has really created an environment where the stock can increase. And now that it has increased we’re saying, ‘Well, it looks like you can start taking more quota again,’” he says.

The scientists say that starting next year, the western quota should not be increased by more than 25 percent, to avoid an undue risk of overfishing. But even that much would raise the quotas to the highest level they’ve been in 15 years.

“I think we have to recognize that we have made sacrifices, New England fisherman, that have paid great dividends, and we shouldn’t be punished for it,” he says.

But conservation groups are dismayed by the prospect. Shana Miller, program manager for Ocean Foundation’s Global Tuna Conservation Program, says that in order to continue the stock’s recovery, the quota actually should be reduced.

If the 25 percent increase is adopted, she says, the data show the stock would decline continuously over the next three years and beyond.

“And then we’ll be in a case where ICCAT will be facing its first-ever failed recovery plan,” she says.

And Miller makes a larger point: For centuries, until decline began in 1960s, the western bluefin population was many, many times larger than now. She says what fishermen and fishery managers today consider abundance is still just a fraction of the species’ historic numbers.

“If you go back 50 years you get a completely different story and that’s when you realize how depleted the stock is,” she says.

There are two major strains of Atlantic bluefin — those that spawn in the Mediterranean and those that spawn in the Gulf of Mexico. The Mediterranean strain is roughly 10 times as abundant as those spawned off this continent, and is considered more robust. But when they cross the Atlantic to feed off American shores, they mix in with the locals, making it very difficult to judge just how well how the western population is faring.

There is evidence that recently, eastern bluefin have adopted a new habit of feeding in Canada’s Gulf of St. Lawrence — a possible indicator that warming waters are driving new behaviors and adding a new variable to assessments of the western population’s size.

But there is some work being done on that.

“So what we’re doing right here, you can see that thicker part where it turns into the thin piece of the otolith,” says researcher Brenda Rudnicky with Portland’s Gulf of Maine Research Institute, which houses the hemisphere’s largest collection of tiny tuna bones called otoliths.

Rudnicky preps a sample that will be used to discern the fish’s spawning year, its sex and, depending on the presence of certain isotopes and minerals, which side of the sea it was born in.

“So that’s the part of the otolith that we’re going to make two cuts, one before that and one after, and that’s what were going to put on these slides to work with,” she says. 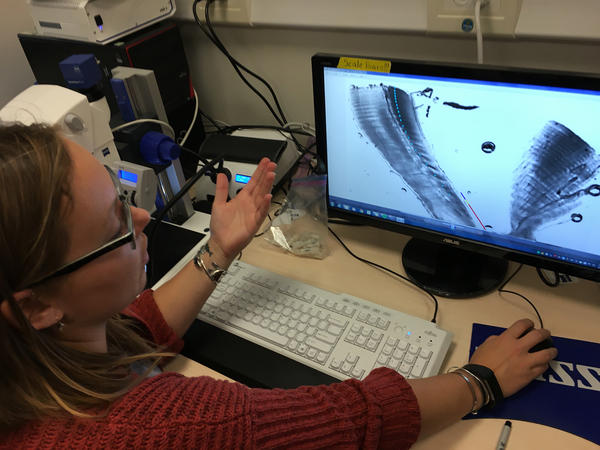 Scientists at GMRI are using otoliths to develop data and models that should open a new window on the true size and health of the two Atlantic bluefin populations. But the international body hasn’t adopted that work yet. So when the ICCAT decides quotas at a meeting that begins next week in Marrakesh, to some degree, their assessments will remain beset by uncertainty.

Oily and smelly - Atlantic menhaden are one of the least sexy fish imaginable. But this humble fish, also called “bunker” or “pogie,” has deep roots off the coast of New England.

During a July morning at the New England Aquarium Animal Care Center in Quincy, Massachusetts, a clinical volunteer checked the heart rate of a Kemp's Ridley sea turtle with a Doppler instrument as a part of its physical exam.

Long Island Sound has a new guardian of sorts. Earlier this year, biologist Bill Lucey was named soundkeeper of the Northeast estuary.

This hour, the Connecticut native stops by our studios.

We learn more about his role and talk about efforts to improve life in and around the Sound.